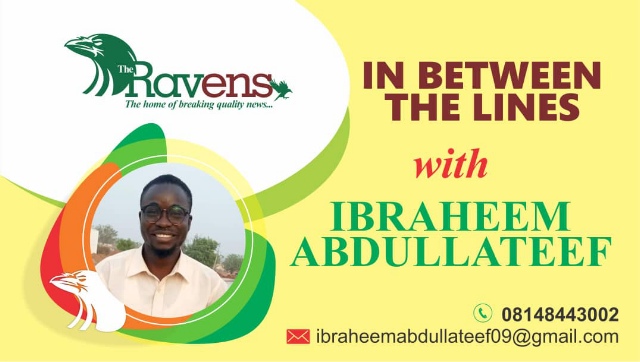 It would be one year in four days that the infamous Ile Arugbo was demolished. Already the protagonists of the awful scheme are stockpiling lies like they were chickens for the New Year to serve the unsuspecting public. Kwarans beware.

“He does not belong to us who does not show mercy to our young ones and respect to our old ones, who does not recommend what is reputable and prohibits what is disreputable,” said Prophet Muhammad SAW(Tirmidhi).

But that was what some people did to Kwara women for years. They superintended massive abuse under the guise of philanthropy. Old people who are deserving of care were made into a large group of impoverished dependants from various communities who were one time or the other assaulted, and even died in a manner which beggars decency. The words of the prophet above were lost on them. Correct were the words that “all spirits are enslaved which serve things evil,” that Percy Shelley said. So, it happened.

Till the “wicked” man, AbdulRahman AbdulRazaq came and began putting a broad smile on the faces of old people across the state.

Precisely on January 2, 2020, the AbdulRazaq administration inked itself into the good books of history. It acquiesced to the voice of reasoning to cast into history the tradition which was becoming an eyesore. A deity which cannot protect one should only leave one to his travails and not add to it. Unlawful acquisition of public properties must stop.

Ile Arugbo was going to go on the one hand because the land was illegally acquired (and no one has been able to prove otherwise till today), the activities on the land posed a bigger problem to the society than the make-belief philanthropy on the other hand. It only required a man with the heart of a lion to take the bull by the horn.

Enter him Kwara Moses, who had liberated the state and poised to take even the old women to a glorious land.

The Governor loves to be unpredictable, so much that his adversaries have come to fear and respect him for the tactical nous. Many times, he worries them: “He is just too strangely quiet. He doesn’t let you into his thoughts.” They’d rap. But on this issue, he surprised even me.

The state was aware that he was going to carry out the resolution of the Committee on Review of Property of Kwara state government, which says to reclaim the land from Asa Investment Limited. But not many after seeing the charade put up in front of the property for two days by women sponsored by you know who will think it would not delay.

Breaking news: Kwara Govt begins demolition of Ile Arugbo. Like a pack of cards, the house which some people boasted was mysterious and could not be taken fell. As the bulldozers retreated, eerie sound enveloped the night and tailed off just as it came. The noise began the following morning. But no reincarnation for the ghost of falsehood. Noise is only noise. It never takes the place of the truth.

One year after such an infamous gale of blackmail, it has changed nothing about the fact that some people of status took the world for a ride and claimed ownership of what they never paid for or lawfully acquired. You may see what has since become of the case here( https://www.thisdaylive.com/index.php/2020/08/23/seven-months-after-where-is-sarakis-right-of-occupancy-to-ile-arugbo/). They know the court case is leading nowhere. Yet they use the case to frustrate the state from going ahead to develop the proposed project.

While the Saraki family run all their might to truncate an idea whose time has come, even the women whom they used as a decoy to deceive the world as victims of fictitious abuse on that night will never pray to return to those days under the cold inside an unsafe, unhealthy environment for the sum of #500 each. Not when Owo Arugbo has become a delight.

Through the quintessential Anchor Kwara State Social Investment Programmes (KWASSIP), Mohammed Brimah, the state announced a special stipend of #6000 was going to unfold for persons above 60 across the 16 local governments of the state once in every two months. Also, beneficiaries would be taking the money on their doorsteps. It is institutionalised, and no one is being denied based on political affiliations and other primordial interests. Essentially, it is easy and fair to all. The words of Steve Maraboli suffices, “The people who care about you won’t have to tell you they care. They will show you.”

Not done, Governor AbdulRazaq approved to astounding applause that the disbursement should begin in Patigi– one of the LGAs in Kwara North, a district which analysts say lacked governmental attention– due to his firm belief that the area deserves a change of fortune. News from the creek says that for all Maigida’s eight years, the same Patigi like many others in Kwara North were virtually erased from the map of the state government.

It could also not have come better than a time the world and old people especially are ravaged by COVID-19 pandemic. The scheme gives them a fair chance to stave off hunger, sickness, and even keep off from the long hands of the virus on the streets.

KWASSIP have since been to communities in at least 12 local governments in all the three districts including far-flung Kaiama, Baruten to words of grace and gratitude for AbdulRazaq. But the world stood still, and my heart paused for breath in Balogun Fulani, Ilorin South LGA two weeks ago. From the mouth of an overwhelmed 76 years old woman, I heard a frail voice but with a strong spirit of the words like that said by Thomas Gray, in Elegy Written in a Country Churchyard, “Each in his narrow cell for ever laid.” Backwards never.

Kareem Khairat knew Ile Arugbo forty years ago. After some time with all the abuses at the place, he had to stop going to keep safe. He had to, in her words, “free and go” the place. Or what is a philanthropy that takes one’s health and dignity? What kind of help equals one’s life? She has experienced a change. And is full of grace and gratitude.

We have one more story. Ganeey stays and hustles in Lagos. He confided in me he is barely surviving. He was aware his old mother despite his best efforts frequented the demolished Ile-Arugbo but time and space couldn’t allow him to rein on her. He used to fear she could die packed like a dried fish inside a taxi as it was customary of them or even right there on the premises they war for stipends on a fateful day. When he heard the land was even illegally acquired and that the building got demolished, he’d heave a sigh of relief.

But he was even happier to guide her aged mother outside to collect the stipend from Ijoba Mekunu. He said something I can not capture exactly here: “There are many like me who can not reach His Excellency. But we appreciate that he took our mothers out of harm’s way. And has not abandoned them. It is a gesture indescribable.”

Thank God for AA, we may have had more grandmas prowling at their gate. He has reclaimed the land with so much bravery and ran support funds for old people as an extension of each other. In fact, nothing could we say has truly changed if we still have mamas in the same milieu, in which we leave them for that labour, in the guise of philanthropy. It would be a shame truly.

Peter Drucker, a vastly successful Austrian- born American management consultant, says: “Effective leadership is not about making speeches or being liked; leadership is defined by results, not attributes.” Well, that’s talking of the Governor. And the women. And their offspring who disliked of their old ways of seeking solace from the wrong channel. Some may still not like his face, but his right judgement continues to resonate in the lives of many and would last for years.

I still run into people who believe that the Governor was vindictive in demolishing the controversial properties as claimed by Asa Limited, even as no proof has been provided. They are few. One once boasted that people would protest for days against him for taking such a decision, in awe of the Saraki and the lies he was fed. There’s nothing impossible for a person with God and on the side of the people. That is what I hope the story has eventually taught him.

I followed the agents to Oju Ekun Zarumi, Balogun Alanamu, and Oloje. Events there made me happier than ever as a member of the team helping the Governor being celebrated. He is getting due recognition on Earth; he will get a bigger reward in Heaven.