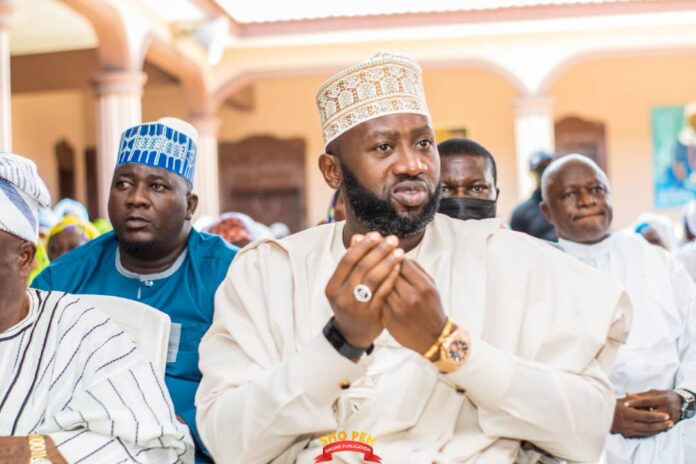 Chairman, Salman Shagaya Foundation, Alhaji Sheriff Shagaya has revealed that his happiest point in life is watching the videos of indigent persons he has impacted with his Foundation’s interventions expressing satisfaction and fulfilment.

The Ilorin-born oil magnate said that his Foundation is one of the most important things in his life, and is in fact dearer to him than his business.

He made this statement earlier today, May 2 when he hosted selected journalists at his GRA residence in Ilorin, the state capital.

The Ravens NG gathered that his Foundation, Salman Shagaya Foundation was established in 2015 after he lost out in his bid to be a member of the House of Representatives in Kwara State.

Speaking on the Foundation, Shagaya noted: “My Foundation is one of the most important things in my life. It is indeed one of the happiest points in my life. People ask me what makes you happy, and then I say it is the videos and interactions with all the indigent people I give solar, food, money to help their businesses. I watch these videos for months back to back, and I am always happy seeing how much impact I’ve made in their lives. For me, my Foundation is more precious to me than my business. If I was given the option to stop being an oil trader but my Foundation will be there till eternity, I prefer my Foundation.”

Giving a background into what inspired him to establish the Foundation, the philanthropist said he had during his bid to contest for the House of Representatives seat in 2015 moved round communities in Kwara State.

According to him, in some of these communities, it’s almost impossible to get something basic for living as water, adding that he even met a 83-years-old man who had not witnessed electricity supply since he was born into the community.

“The level of poverty in those areas was shocking. The residents only need little to live yet are struggling to get it. That was one of the saddest days of my life. They’ve never seen light before. But politicians will come to identify with them during elections only to dump them later. From this experience, I sat down and thought of what I can do to make impact in the lives of these people, then I established the Foundation.”

Shagaya also distanced his Foundation from partisanship and politics, saying he could guarantee 100 percent that Salman Shagaya Foundation has no political undertone.

“If I ever find out that gestures are made to people based on their political standing or party, I can dissolve the board and bring in people who are ready for the job. Charity should not be about politics. The Foundation is just to help people. It does not have anything to do with party or politics.”

He disclosed that though his philanthropic gestures are more reported and pronounced in Kwara State, he also makes philanthropic interventions in states like Kaduna, Katsina and even faraway London.

The Chairman, who prayed that his Foundation should be ten times bigger than it is now in the next five years, gaining more structures in the society, said it is wrong to think the journey had been rosy for him.

“It has been a very rough ride. When I started business, I had no capital. But Allah has been very faithful to me. At this point in my life, I can however say that things have been much easier, but the journey through the ladders of life was never rosy.”

Th UK-trained Economics graduate posited that for insecurity to be tackled in Nigeria, the government must invest heavily in reducing the problem of unemployment that’s endemic in the society.