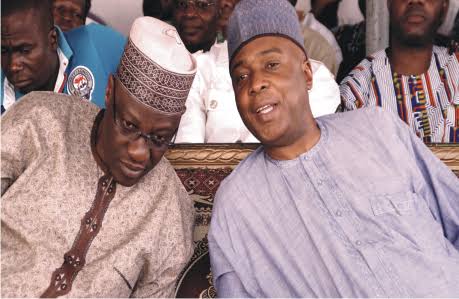 A fresh trouble seems in the offing for former Kwara State Governors Bukola Saraki and Abdulfatah Ahmed as a white paper panel set up by current Kwara Governor AbdulRahman AbdulRazaq indicted them for criminal conspiracies and economic sabotage, according to a statement by Rafiu Ajakaye, Chief Press Secretary to the Governor.

Submitting their report, chairman of the panel, Barrister Hussein Buhari said their findings were mind boggling, noting nothing short of diligent prosecution, possible jail terms and recovery of many of the properties can avenge the “official connivances” that led to the pilferage of the assets.

He said the former Governors and many of their aides have questions to answer on how public properties and shares were sold under questionable circumstances, including on the eve of their departures from public offices.

“For instance, the rots on Shonga Farms, Satellite Motel, and our properties in Kaduna, Abuja and Lagos were simply inconceivable. They were all sold to themselves at giveaway prices. We saw criminal conspiracies. In fact, Kwara State is now heavily indebted to some people because the past governments mismanaged our properties. I just wish Governor AbdulRahman AbdulRazaq will have the courage and political will to implement the report so that everybody found wanting will be brought to book. And the Electoral Act is very clear that anybody who is found guilty of mismanagement of resources be banned for 10 years from holding political office. We wish the government will accept our recommendations and set up an implementation committee.

“There are so many instances where those in government before used their positions to acquire government properties in questionable circumstances. For instance, the High Court Complex in Tanke, Ilorin they removed all the steels and allocated the land to themselves, they built hotels and eateries on government properties. All our houses in Kaduna have been sold. Today, apart from our liaison office, we do not have anything in Kaduna.”

The panel disclosed that Saraki, Ahmed and other officials indicted failed to honour the invitations for them to clear the air on the deals, and said the administration should prosecute them as a matter of justice.

“Also, our shares, bonds and stocks were sold out within five weeks of their leaving office. These are worth billions of naira. Even, the Amoyo International Market in which they claimed that they bought land for over N400m and paid about N200m and also swapped 10 pieces of our land in Abuja for Amoyo land by Harmony Holdings Limited. Personally, Bayo Sanni and Tope Daramola need to be brought to book on the issue.”

In his response, Saraki through his Press Officer, Abdulqadir Abdulganiyu said the claims by the panel were false and diversionary, adding that Governor AbdulRazaq is always jittery whenever he hears his name.

Abdulganiyu also denied that his principal as well as former Governor Abdulfatah Ahmed were invited by the panel, saying the panel was not concerned about fact finding.

“First, for the information of discerning members of the public, neither Dr. Abubakar Bukola Saraki who left the Office of Governor of Kwara State ten years ago nor Alhaji Abdulfatai Ahmed, the immediate last Governor got an invite to appear before any investigative and fact-finding panel set up by the Abdulrazaq administration. Thus, it is clear that the so-called investigation being conducted is not about finding facts. It is about throwing mud and staining the predecessor of Abdulrahman Abdulrazaq in Office.

“Secondly, while reacting to the claims contained in the poorly written and disjointed press statement, it should be noted that both Dr. Saraki and Alhaji Ahmed will never be shy of giving account of how they managed the assets of Kwara State. In fact, both men took decisions concerning those assets in a manner that will enhance their value and stimulate economic activities in the state, which was hitherto referred to as a civil service state,” the response read in part.

The Press Officer described the press statement as one of the tactics of Governor Abdulrazaq to divert the attention of the people from his non-performance and lack of tangible projects that can be showcased during the second anniversary of his administration, which is about 48 hours away.