Kwara state National Association of Nigerian Students (NANS Kwara) yesterday inaugurated new executives that will steer the affairs of the association for the next 12 months and also launched a magazine titled “THE UNCOMMON LIBERATOR” in honour of Kwara State Governor AbdulRazaq AbdulRahman.

The event, which was held at Banquet Hall, GRA Ilorin, was graced by the movers and shakers of Kwara and erstwhile students’ leaders

Speaking at the event, the outgone NANS Kwara Chairman, Comr Wasiu Onidugbe, in his speech, appreciated the state government for giving his administration a soft landing in the sense that virtually all agitations be the apex students’ association were met. He said the touches of the government reflects in all tertiary institutions across the state and that student welfare was prioritised, and the sense of humility to the student’s constituency was displayed by the government.

Onidugbe said despite the coronavirus challenges; he has the privilege to rebrand and set the association for sustainable growth and progress.

“The rebranding of the previous path mantra has for the opportunity to develop projects and programs into an effective addressed most of the needs and problems of students by formulating path of prosperity, we have developed “rebranded action plan,” which served as a collaborative process. 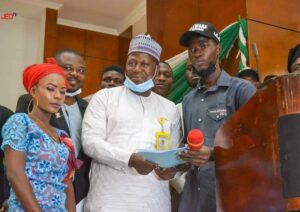 “Under my leadership, we established an ‘entrepreneurship hub’ named AGF AbdulRazaq Hub, which gives room for students interested in learning skill acquisition to acquire the skills.

“I must advise the incoming executives to sustain our achievements and continue to make NANS Kwara great,” Onidugbe noted.

Comrade Saleeman Yusuf Issah, while delivering his inaugural speech, commended the efforts of the outgoing executives and promised to tow the path of greatness they left behind.

Saleeman made it known that NANS, under his leadership, has come up with the fourth edition of NANS Kwara “ACME” Magazine tagged “The Uncommon Liberator”, which was officially launched in honour of His Excellency, Governor AbdulRahman AbdulRazaq. 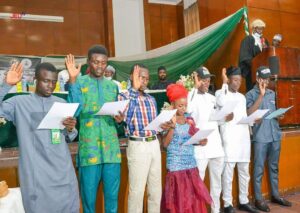 The magazine which featured articles from Nigerian Students across various institutions that form NANS Kwara axis, and it contained a wealth of information, inspiration, and creative ideas to the readers.

“As a consequence of the significance of entrepreneurship in creating wealth and improving individuals’ standard of living, the leadership of NANS, under my watch, will collaborate with the state government through the Ministry of Enterprise as well as the SSA Youth Engagement to organise skills acquisition training at AGF Abdulrazaq Entrepreneurship Hub, specifically for the entire Nigerian students who chose Kwara state as their centre of learning.

“This worthwhile idea was borne out of the zeal to develop the human potential of our fellow students by equipping them with the required skills for them to be financially independent.

“Also, in an attempt to ease the financial burden of our fellow students, I have come up with the idea of founding the NANS Kwara Trust Fund scheme, which would be channelled towards helping students with health challenges as well as those with financial difficulties ranging from inability to make school fees payment as at when due, and all other financially related hiccups facing students during their academic sojourn. 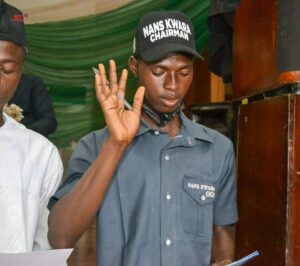 “To achieve this, I have set up a five men working committee which comprises Professor Amuda Kannike, SAN, as the Chairman and Mr. Lawal O. Olohungbebe as the Secretary. In addition, the official date for the commencement of their operation is hereby pronounced to be Wednesday, 9th of June, 2021.

Speaking at the event, Kwara State Governor, represented by the Commissioner for Tertiary Institution, Science and Technology, Barrister Senior Ibrahim, urged students to shun social vices that could defer their success.

Barr. Senior advised media as the fourth estate of the realm to always tackle fake news peddlers that are trying to jeopardise the image of journalism in Nigeria.