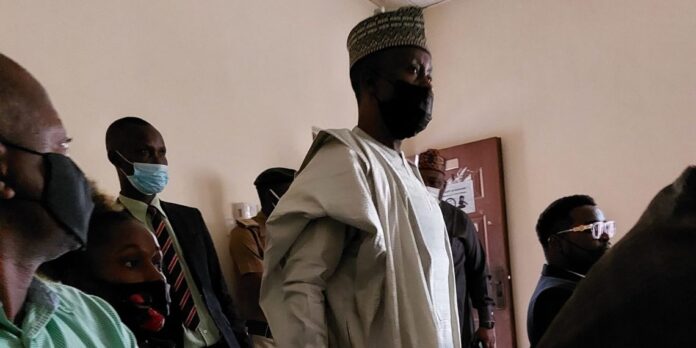 A federal capital territory (FCT) high court sitting in Apo, Abuja, has sentenced Farouk Lawan, former chairman of the federal house of representatives ad-hoc committee on fuel subsidy, to seven years imprisonment over the $3 million bribery charges preferred against him by the federal government.

Lawan was the chairman of the house of representatives ad hoc committee probing the multi-billion naira fuel subsidy fraud in 2012.

He was accused of demanding $3 million from Femi Otedola to remove Zenon Petroleum and Gas Limited (Otedola’s company) from the list of oil companies allegedly involved in the fuel subsidy fraud in 2012.

Lawan, who was arraigned on seven counts of bribery by the Independent Corrupt Practices Commission (ICPC), was alleged to have collected $500,000 bribe from Otedola.

The charge was later amended to three counts.

Otedola, while giving evidence as the fifth prosecution witness, said the defendant had demanded $3 million from him with a threat to indict his company.

The businessman said he proceeded to report the issue to the DSS and was given $500,000 in marked notes. Also, the DSS had planted a camera in Otedola’s house.

On count one, Lawan had argued that the prosecution had failed to produce the call log between himself and Otedola in which he demanded the bribe. Lawan had also submitted that he collected the money from Otedola to prove that the oil mogul had offered to bribe the committee so as to have Zenon removed from the list of indicted companies.

But Angela Otaluka, the presiding judge, while delivering judgment in the case on Tuesday, held that “it is the duty of the defendant to produce materials upon which he places his defence”.

She went further to state that the defendant failed to call one honourable Ribadu or any member of the house committee to buttress his claim of collecting the money to implicate Otedola. The court held that they were “vital witness” needed to prove his case.

“I am convinced that the defendant corruptly asked and demanded for $3million of which he received $500,000. It is my finding that count one of the charge was not based on suspicion but on credible evidence,” Otaluka held.

On count two, the court held that if indeed Lawan did not have a “corrupt intention”, he should have reported the issue to a law enforcement agency or any member of the house committee when he was offered the money by Otedola.

“It is my finding that there was an intension to corruptly accept the money for the removal of Zenon petroleum from the list of indicted companies,” the judge held.

The judge held that the prosecution “has beyond reasonable doubt, established the elements of the charge in count two”.

Otaluka noted that the evidence tendered by the defence “were not accorded any credibility and not worthy of belief” for being inconsistent.

“I am totally convinced that the defendant did not collect the money to serve as a lesson to other companies,” she held.

“I therefore find the defendant guilty of counts one, two and three.”

However, the sentence is to run concurrently, meaning the convict will only serve a seven-year jail term.

Otaluka also ordered the convict to restitute by paying back the $500,000 he collected from Otedola.