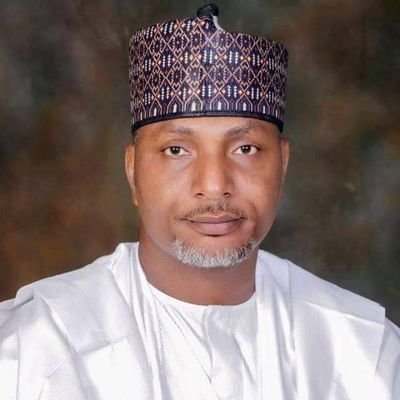 Social commentators and stakeholders in Ilorin, Kwara State, have criticised ADA’s outbursts as ‘unwarranted’ and ‘hypocritical.’

It will be recalled that the community group had berated Mustapha for allegedly making public the latter’s donation of the sum of five hundred thousand naira for a Quran memorization competition, part of the programmes at the 2021 annual general meeting of the association.

Consequently, it said it had withdrawn an alleged award earlier set aside for Mustapha ahead of the competition.

“The entire Muslims who read the ADA appreciation letter written to Mallam Soliu Mustapha on social media, were surprised and felt disappointed by this act,” the rejoinder signed by Musa Olanrewaju and Abdullahi Ayo, ADA Chairman and Secretary respectively, read.

But barely minutes after the ADA rejoinder surfaced online, netizens reacted scathingly against the community association. Commentors described the ADA’s reactions as ‘inappropriate’ and ‘hypocritical.’

“Is this an ideal way a community development association should behave? Do the excos of Agbaji Development Association (ADA) understand the implications of their egregious act?” the spokesperson of Ilorin Emirates Youth Development, Muhammad Jaguma queried.

He continued: “You solicited Mallam Saliu Mustapha’s assistance, knowing full well that he is a politician. He assisted and his media aides shared it on social media. The next thing is now for the association to issue a statement withdrawing the award you have not given him and retracting your invitation to make him the chief launcher. Is this the first time you will receive assistance from politicians and it will be publicised?” 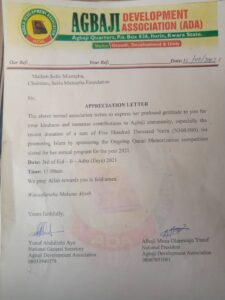 For Jaguma, it is no crime to announce one’s assistance because it serves as a medium to encourage others to do the same.

Also reacting, Yinka Otukoko, an aide to former Senate President, Bukola Saraki, said there was nothing wrong in Saliu Mustapha’s aide’s conduct. He however ruled out politics from the ADA’s reaction.

“I, as a person, don’t see a reason why a Solihu Mustapha cannot donate to Islamic program in Agbaji or anywhere. I have read a lot about him, even with IEYDA, in this direction and I think a true Ilorin son should be cool with that. I trust SM would have recieved a lot of appreciation letters from groups, communities and associations across the Ilorin emirate in this regards, I cannot remember anytime I read a publicity from SM through any social media blog.” 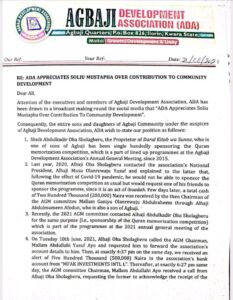 But Dr. Mariam Abdullah sees otherwise. She argued that the ADA’s reaction was political. She described it as ‘politics taken too far.’

“When you are collecting the money, did you give them the condition that it should be treated as a secret? 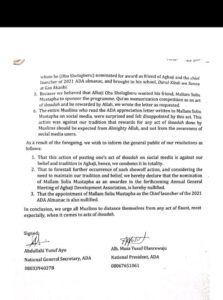 “Just last month, Bukola Saraki, your Agbaji son used a whole week to publicize his donation of money to the Imam Gambari mosque (also a fizebililahi) without any wahala. Why didn’t you go and dance naked in the market sqaure because of that?

“We know it’s all about politics, but this is an unfortunate politics, and the consequences on the psychology of community spirited people like Solihu Mustafa are dare.

“You’ve not embarrassed Solihu Mustafa because we know who he is and his intentions towards our beloved community. You’ve merely embarrassed yourselves and the people that recommended you. The shame is actually on you.”

Also reacting, Bolaji Aladie, an aide to Kwara Central Senator, Yahaya Oloriegbe, challenged the group, questioning why it cannot raise the fund from members rather than approach approaching outsiders.

He added that ADA had not done the right thing until the proceed of Mustapha’s kind gesture was refunded.

“I don’t know why ADA chose to make moutain out of mole hill. Ain’t (sic) they knew (sic) that the donor is a political figure? You don’t want to name your child Esunfunke but you could approach Esu deity for barreness solution. Could you eat your cake and have it?

“When they didn’t want the gesture to be publicised, why can’t they raise the fund from within themselves rather than approach people from the outside? They have not done the right thing until they return the money.”

Meanwhile, Lateef Salam, a legal practitioner and public affairs analyst, stated that the action of the executives of ADA might discourage philanthropists willing to support community development.

“They closed the gate to philanthropistic gestures because they have expressed their ungratefulness, lack of vision and mission openly.

“The best the Agbaji Development Association should do, is to return the sum donated by Mallam Saliu Mustapha. Returning the said money to him will close the case. If they are still holding on to the money and still speaking thrash, they are talking to themselves not the wiser public,” Salam said.