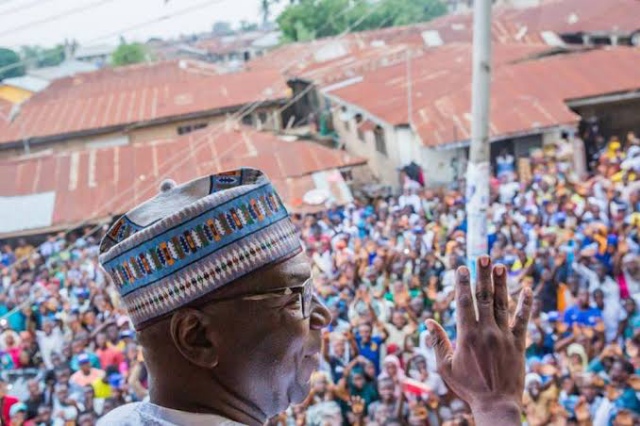 Kwara State Governor, AbdulRahman AbdulRazaq has explained how he emerged governor despite boycott by some party cabals whom he said “think they own the party”.

AbdulRazaq gave the explanation at the launch of a book titled ‘Otoge’ in Ilorin, offering rare insights into the protracted crisis rocking the state chapter of the All Progressives Congress (APC).

The Governor traced the party crisis to his refusal to fund a campaign structure that was formed without his prior knowledge or input as the governorship candidate.

He also said some cabals within the party who received hundreds of millions of naira as donations for the Kwara struggle from far and wide did not deliver a kobo to him.

Represented by Deputy Governor Kayode Alabi, AbdulRazaq said party officials were equally barred from campaigning with him until the presidential election had been won and the pendulum was clearly swinging in his favour.

“Since this book is about history, I feel it is important to set the record straight on a few things. First, the Otoge is the struggle of our people and it did not necessarily start in 2019. Every Kwaran of good conscience owned and worked for that struggle in various ways. We were only positioned by providence to lead the final lap of the breaking of the jinx that dated back many decades,” he said, in what was the first public statement made by him on the issues within the party.

“However, permit me to assert here that contrary to some claims out there, the battle cry Otoge and its adoption were a product of a statewide field research that I commissioned shortly after the primaries in October 2018. If anyone could lay claim to its copyright, it has to be the Hook Nigeria, a communications outfit owned by very young people. One of them, Toyyib, is a Kwara South prince. I had held meetings with various PR outfits but I found their own presentation most strikingly catchy and reflective of the Kwara struggle. We ran our campaign with that slogan and it quickly resonated with our masses. So popular was it that even motorcyclists and trailer drivers adopted it in their honking. It became a household refrain. To God be the glory and we thank the people of Kwara for this.

“I also need to set the record straight about the party crisis. It did not begin after the election or swearing-in. It is safe to say that those who claimed to own the party in the state at that time practically disowned me until after the President had won his election and the coast became clearer back home. Here is the story. Shortly after the primaries in October, the party told me they have set up a campaign structure. Nobody consulted me before doing that, even though I was the governorship candidate. They asked me to fund the campaign structure that I was not privy to. Of course I declined it. I would later lead my own small campaign team across the state. It is on record that the party officially boycotted my campaign tours. Party officials got the instruction not to attend my campaign. A few of them can testify to this. I went round the whole of Kwara North without the party. However, they stylishly joined the campaign after the presidential election when it was clear Kwarans had decided in our favour. I am not aware of any decent democracy where a candidate would not be given the privilege of shaping the direction of his own campaign. It is even worse that my campaign was boycotted because I refused to be led by the nose.

“I have told these stories of the slogan and of the party issues to disabuse the mind of Kwarans or friends of Kwara who may not have had this information. In doing so, I am not claiming sole credit for the success of the struggle. Far from it. I have done so simply to clear the air, and this book launch offers the right platform to speak up. And for Ministers, Governors, party supporters and friends of Kwara who I later heard donated hundreds of millions of naira to support the Otoge struggle in Kwara, I want to say that I did not receive a kobo of that fund. But how that money was managed or stolen is a story for another day!”

The Governor congratulated the author of the work Tony Oyeyiola, describing it as a commendable effort and directing the purchase of 100 copies for the government.

“I believe efforts as this are necessary to research and document history and the various roles played or purported to have been played by various stakeholders. I congratulate the author for the work,” the Governor said, adding that the Otoge revolution brought a lot of lessons for everyone, including current office holders.

“Let me make it abundantly clear that we are guided by lessons of history. On our part, we are working within available resources and realities of our state to be on the right side of history. This explains our efforts in spreading development and making huge investments in basic amenities of life. While we are not perfect, we have facts and figures to assert that our state is better than we met it on all indices.”