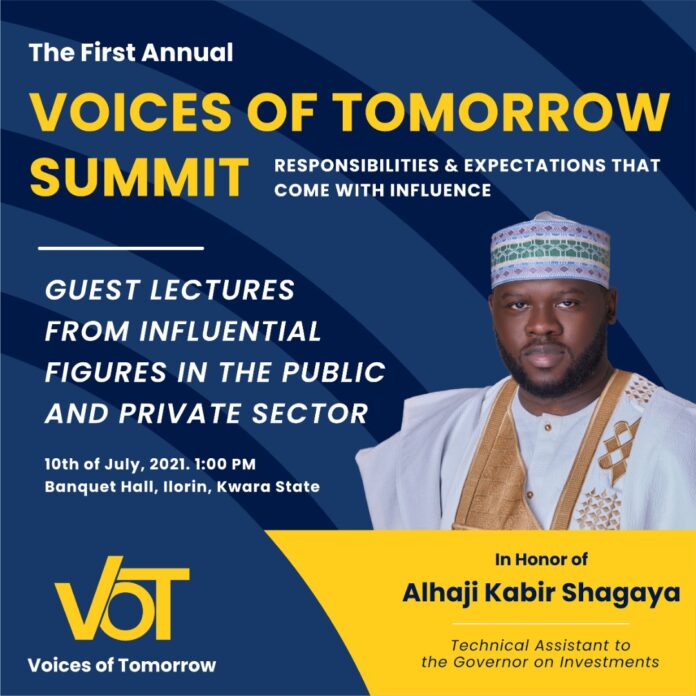 The programme, which is non-political, is being put together by the Technical Assistant to Kwara Governor on Investments Kabir Shagaya as part of his contributions to youth and national development.

Tagged Voices of Tomorrow (VOT) Summit, it is expected to hold on July 10, 2021 in Kwara and subsequently, positioning the State of Harmony as a centre of learning, investments, and leadership development. 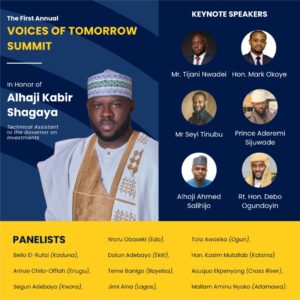 Shagaya said in a statement in Ilorin that the summit is an annual event that seeks to bring accomplished young people in the private and public sectors together to chart the way forward for the development of the country.

Kabir disclosed that this year’s theme, “Responsibilities And Expectations That Come With Influence,” was carefully chosen to discuss the roles of young people in building a united, safer and prosperous Nigeria.

The statement said other top public officials and successful entrepreneurs like Tijani Nwadei; Waru Obaseki; and Seyi Tinubu are expected to grace the event.

Other guests are members of the traditional council; students bodies; youths groups; clergymen, as well as prominent members from within and outside Kwara State as resource persons and participants.

“There is a lot of heat across the country and people are divided along different lines calling for political solutions,” the statement quoted Kabir as saying.

“Only a few are discussing the genuine issues of development and the role that each of us in society has to play in achieving national prosperity. The first point of education should be an understanding that everyone is in a position of influence. However, those who are privileged, especially accomplished youths in public and private sectors, have a higher responsibility and more is expected of them in setting an example of excellence.

“To ensure that our actions match our words, the Voices of Tomorrow summit is creating a platform for young Nigerians to brainstorm and partner for socioeconomic growth of the nation. We will be converging annually across Nigeria to advocate and collaborate for changes and innovation in leadership and economy.”

Kabir also lamented the lack of a strong support chain and mentorship between the youths and leaders, which, according to him, is responsible for the current division in the society.

He stressed the need for the nation to be united and harmonious to maximise its potentials as the most populous country in Africa.