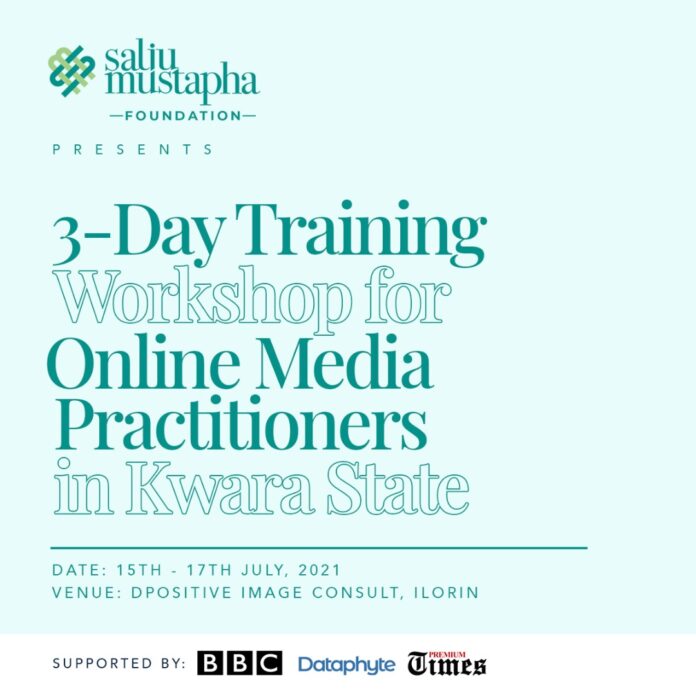 • The Ravens NG to participate

“The workshop will focus on different aspects of journalism such as investigations, data and fact-checking, and the multimedia. Other areas of focus are ethical journalism, newsroom management; opportunity, prospects and challenges of online media practice, etc,” according to a statement by the Director General of the Foundation, Ambali Shuiab Adebayo.

“The training is part of efforts to help online news mediums and journalists in the state improve on their reportage, enhance the practice of ethical journalism and inform them on the dynamics birthed by technological advancement,” he noted.

“The importance of courageous journalism in the time of adversity cannot be overemphasised and the Saliu Mustapha Foundation shares the idea that democracy needs a robust and vibrant media to function at an optimal level.”

The Foundation partnered journalists from the British Broadcasting Company (BBC), Dataphyte, Premium Times and academics from the University of Ilorin.

“Five facilitators from different sections of the media will train over 30 journalists from among the robustly growing number of media practitioners in Kwara state.

“The participants will be engaged for a maximum of five hours, between 9:00am and 2:00pm daily, for the three days. The programme also promises a hackathon session and unlimited access to the facilitators for mentorship after the workshop.

“The training will hold between Thursday July 15th and Saturday, July 17th at Ilorin, the Kwara state capital.

“Formal invitations have been sent to all participating media houses, who in turn have accepted same, and have expressed their enthusiasm to attend the one-of-a-kind event.”

The Ravens NG also got the invitation letter and has since showed its readiness to participate in the session geared at bolstering human capacity.

Chairman of the Foundation, Saliu Mustapha, who is currently in Paris, would participate virtually, this medium reliably gathered.