With the advent of the digital age, the word ‘media’ suddenly acquired a different meaning – confusing the media professional and opening the eye of the news consumer, as digital technologies suddenly transformed the way information and news content are distributed and consumed around the world.

Since the advent of the internet in the early 1990s, the media space has been gravely altered with huge consequences for media practitioners and consumers of traditional news media – what with the altering of media consumption habits, the reinvention of old professional practices, the altering of agenda-setting platforms and status-conferral processes, the bursting of old media conventions and the creation of new traditions.

In this era of disruption, brought on board by new technologies which are circumventing traditional news media and contesting its once celebrated advantaged position as gatekeepers of news, information and popular ideas, the traditional media is struggling, not just to defend its old position, but to reinvent itself.

Clearly, the swift information and communication technology inventions that came with the internet eclipsed the basis and process of news gathering and reporting and introduced unusual paradigm shifts which shook the foundations of the news media industry. Like the reality on the global scene, digital technologies are also fundamentally altering the nature and function of media in Nigeria.

Today in Nigeria, specifically in Kwara State, there are clear signs of the eclipse of the traditional media as once-vibrant traditional news-media organisations today struggle to fund their operations, given dwindling circulation numbers brought on board by expensive news-prints and difficult to manage printing presses as well as shrinking advertising patronage, given the hot contest from nibble, cost-effective, smart and widely accessible digital news platforms.

A unique digital platform for breaking news, educating the consumers, informing the readers about the happenings in the state, country and the entirety of the world today in Kwara State is “The Ravens NG” – the platform has reinvented how news consumers access news, share news and push news among communities. It has also changed the way agenda is set, and opinions are shaped. This dynamic landscape has occasioned massive shifts in the way news consumers see the world and the role of the media in it. In Nigeria today, Kwara is one of the leading states evolving in the media industry. As the Kwara media continues to evolve and “The Ravens NG” remains the most unique and highly balanced medium in news reportage, it is pertinent to commend and applaud their wits, seriousness and unbias on the path to its evolution over the last ONE year. 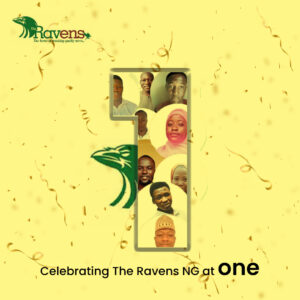 Not just large but massive, with a thick neck, shaggy throat feathers, and a Bowie knife of a beak. In flight, ravens have long, wedge-shaped tails. They’re more slender than crows, with longer, narrower wings and longer, thinner “fingers” at the wingtips. Common Ravens are entirely black, right down to the legs, eyes, and beak.

As “The Ravens NG” celebrates her first year of productive and impactful existence, and while as a columnist of the medium, I observed comments, reviews and opinions of readers and visitors of the platform and the platform across the board has been rated investigating, fact-checking, and standards of accuracy high among the qualities that set them apart from amateur journalists and bloggers. It distances itself from the spread and embracing of news “cannibalisation” (taking material from other news organisations without attribution). They repel themselves as they know the how negative influence of how the loss of exclusivity is impacting on practices of reporting and on standards of “accuracy” and “sincerity” and solely establishing new standards of transparency that help protect professional reporting in the new, networked era, as well as improving ethical standards in journalism.

Congratulations to The Ravens NG!