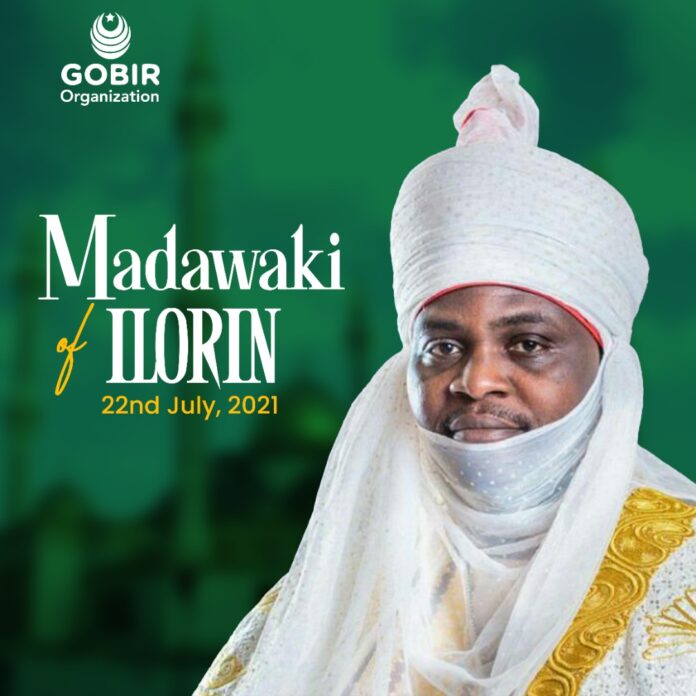 No better reward or recognition can come the way of a patriot than being celebrated at home, by his people. Conversely, being celebrated at home is not as exciting as being honoured by a popular and well respected Monarch. More importantly, being honoured by a Sovereign is not as pleasant as experiencing same in the presence of a wide spectrum of the people of the honouree’s community. The scenario above explains the excitement of the people of Ilorin Emirate, particularly relations, friends, associates, admirers as well as supporters of the Waziri Kasar Hausa, the increasingly popular political figure, Alhaji Yakubu Garba Gobir, when His Royal Highness, the Emir of Ilorin and Chairman of the Kwara State Council of Chiefs, Alhaji (Dr) Ibrahim Sulu-Gambari, CFR, announced the approval of his appointment as the new Madawaki (Commander-in-Chief of the Armed Forces of Ilorin) of Ilorin on Thursday, July 22, 2021 at the event climaxing the celebration of this year’s Eid-El-Kabir festival at his ancient palace in the presence of a mammoth crowd of people from different parts of Ilorin Emirate and beyond, which spontaneously went into jubilation.

From my interactions with a cross-section of indigenes and residents of Ilorin, no one in the city was surprised by the conferment of the prestigious title,which was first held in 1955 by a notable political figure, nationalist and first Northern Regional Minister of Health, Alhaji Yahaya Ori-Okoh,MFR. The pre-eminence of the title can also be further appreciated by the calibre of its last holder, the highly respected Honourable Justice Saidu Kawu, CON,who served as the first Chief Judge of Kwara State before his retirement as a Justice of the Supreme Court of Nigeria.

The words on the lips of everyone since the royal announcement was made was that if anyone deserves a traditional chieftaincy title in the contemporary Ilorin, it was this great son of the soil who has left no one in doubt of his mission to fast track the development of his ancestral home. Apart from his personal contributions, this 56 years old patriot has no other choice than to continue with the worthy legacy of service he inherited from his forebears.

His grand father, Alhaji Muhammadu Ajeigbe Gobir, the first Waziri of Ilorin, was a pioneer western educated elite in Ilorin who worked for the emancipation of the people of the community as a teacher, linguist, counselor and community leader. His father, Ambassador Abubakar Garba Gobir, was also a teacher, diplomat and an administrator who represented Nigeria in several countries before retiring as a Permanent Secretary in the federal civil service in 1988. Two of his uncles, Alhaji Yusuf Amuda Gobir, OFR, and Alhaji Yakubu Amori Gobir, were also outstanding patriots who did very well as Permanent Secretaries at the federal and state levels, respectively.

The respected Emir of Ilorin must have considered so many factors before conferring the title on Alhaji Gobir. Aside his fascinating pedigree,the new Madawaki has also carved a niche for himself in the recent annals of Ilorin. The list of his achievements are endless; is it the comprehensive renovation of the first primary school in Ilorin, Okesuna LGEA School, that was not enough to earn him the title? Or is it the regular empowerments of the ordinary people across the State that is not significant enough? Is it the monthly celebration of truly outstanding individuals who are contributing to the peace and progress of Ilorin that does not deserve royal endorsement and encouragement? What about his huge donations to many projects and programmes of the people of Ilorin? What about his passionate support to the umbrella socio-cultural organisation of the people of Ilorin Emirate, the Ilorin Emirate Descendants Progressive Union,over the years? Who is also not aware of the good image of Ilorin that the new Madawaki has been relentlessly polishing and promoting all over Nigeria and beyond?

Alhaji Gobir ,who has become an household name in Ilorin as a result of his philanthropic dispositions,was born in the city of London on 19th October, 1965 to a father, who prior to joining the diplomatic service, was the Private Secretary to the enigmatic Sardaurna of Sokoto and the only Premier of the defunct Northern Region, Sir Ahmadu Bello, GCON, KBE. His mother, who hailed from Olugbon compound in the Adeta area of Ilorin, was Alhaja Belawu Gobir. She was also an outstanding teacher and professional who raised the new Madawaki of Ilorin in the best of manner and which made him what he is today; a great doyen, a friend of all.

The new Madawaki of Ilorin, who is also the Waziri Kasar Hausa, is a trained pharmacist. He is also a successful entrepreneur. Further more, Gobir is an unusual politician and a fascinating philanthropist. He had his primary and secondary school education abroad courtesy of the career of his illustrious father. He attended American International Schools in Lome, New Delhi and Stockholm. It was at Cheltenham College, England that he completed his GCE in flying colours.

Alhaji Gobir then proceeded to the prestigious Ahmadu Bello University, Zaria, where he graduated at the age of 19 with a degree in Pharmacy in 1985.This great son of Ilorin is also a graduate of Institut Europeen d’Administration des Affaires (INSEAD), Fontainebleau, France and Harvard Business School in the United States of America.

After spending a number of years working for Pfizer and Hoechst in Nigeria, Alhaji Gobir started his own marketing and distribution company – Smart Mark Limited in June 1998. The company has since opened up the Nigerian market for a number of multi-nationals including Swatch, Sara Lee, Wella, L’ Oreal, Nike, Levi’s,  Converse, United Colors of Benetton, T.M. Lewin, Tommy Hilfiger and Unilever. His company employs over 500 people.

As a politician, Alhaji Gobir is a foundation member of the All Progressives Congress(APC) in Kwara State. He was among those who campaigned vigorously, and played a pivotal role in the decisive victory of APC in the historic 2019 elections. His donation of a befitting State Party Secretariat, and branded vehicles to President Muhammadu Buhari’s re-election campaign was headline news nationally, and also drew a lot of sensation on social media for weeks during the 2019 elections.

Alhaji Gobir, who is married to Hajiya Bilikisu Gobir, an indigene of Zaria, Kaduna State and blessed with promising children, has extensive experience in the private sector spanning over three decades, and training at two of the world’s leading business schools. He is well travelled as his expertise includes attracting foreign direct investments and trade. Waziri Gobir has great passion for social entrepreneurship, hence, he is the founder of The Gobir Organisation Foundation which is focused on high impact social investment programmes.

This great Nigerian is a polyglot. He speaks English, French, Hausa and Yoruba languages fluently. Despite being a thorough Ilorin man, Alhaji Gobir is also a de-tribalised Nigerian, who finds maintaining old friends and making new ones easy as he has high regards for patriotic dispositions.

Long before the effective dismissal of the popular saying that “a Prophet has no honour at home” from his career, Alhaji Gobir was conferred with the title of Waziri Kasar Hausa (Hausaland) by His Royal Highness, the Emir of Daura, Dr Farouk Umar Farouk, in 2016 while the official turbanning and durbar took place in the ancient city of Daura in November 2019.

While I commend His Royal Highness, the Emir of Ilorin, for rewarding the patriotism and services of this outstanding gentleman with a distinguished honourary chieftaincy title, I am of the firm conviction that this timely honour would not only spur Alhaji Gobir to do more for the people of Ilorin Emirate, but would also stimulate others to work for the progress of Ilorin Emirate and Kwara State as priotised by the new Madawaki of Ilorin. It is my fervent prayers that may the Almighty  Allah grant Alhaji Gobir long life, sound health, greater wisdom and every other thing he would need to serve his people the more.