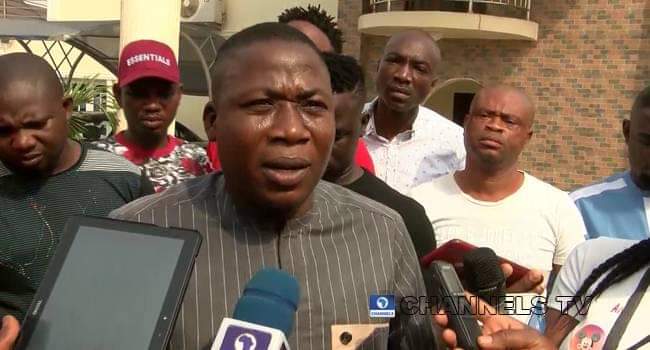 Isokan Omo Odudua, Yoruba rights group, has offered free accommodation to those who wish to travel to Cotonou, Benin Republic for the court hearing of Sunday Adeyemo, a Yoruba nation agitator better known as Sunday Igboho.

Igboho was arrested with his wife at the Cardinal Bernardin International Airport, Cotonou, Benin Republic, on Monday. He was arraigned before a judge at Cour De’appal De Cotonou on Thursday.

The Nigerian government is seeking the extradition of the Yoruba nation agitator after he escaped from his Ibadan home when operatives of the Directorate of State Service (DSS) raided his house on July 1.

Two people were killed by the DSS during the raid while 12 others were arrested and whisked to Abuja.

Although the court released his wife who is a German citizen, saying she had no case to answer, Igboho was returned to custody while the case was adjourned till Monday.

Already, many Igboho supporters are in Cotonou in solidarity with him. Some were present when the Benin Republic government took him to court while others have been forming clusters(pictured) outside the facility where he is being held.

Isokan Omo Odudua said 30 people have travelled to Cotonou on its bill and called for more in a statement released on Sunday.

The group said: “Please don’t be deceived we still need more people in Benin Republic to prove that Igboho is not a criminal.

“We have just only 30 people right now in Benin Republic. Call these numbers if you want address and free accommodations.”
Ibrahim David, Igboho’s lawyer in Cotonou, had earlier advised against the convergence of his supporters at the court premises.

“On Thursday, there were too many Yorubas from Nigeria and Cotonou in court and I told them it is not good. They should stay at home and pray. They should leave the lawyers to do the work. Coming to the court is not good for the case,” the lawyer had warned.