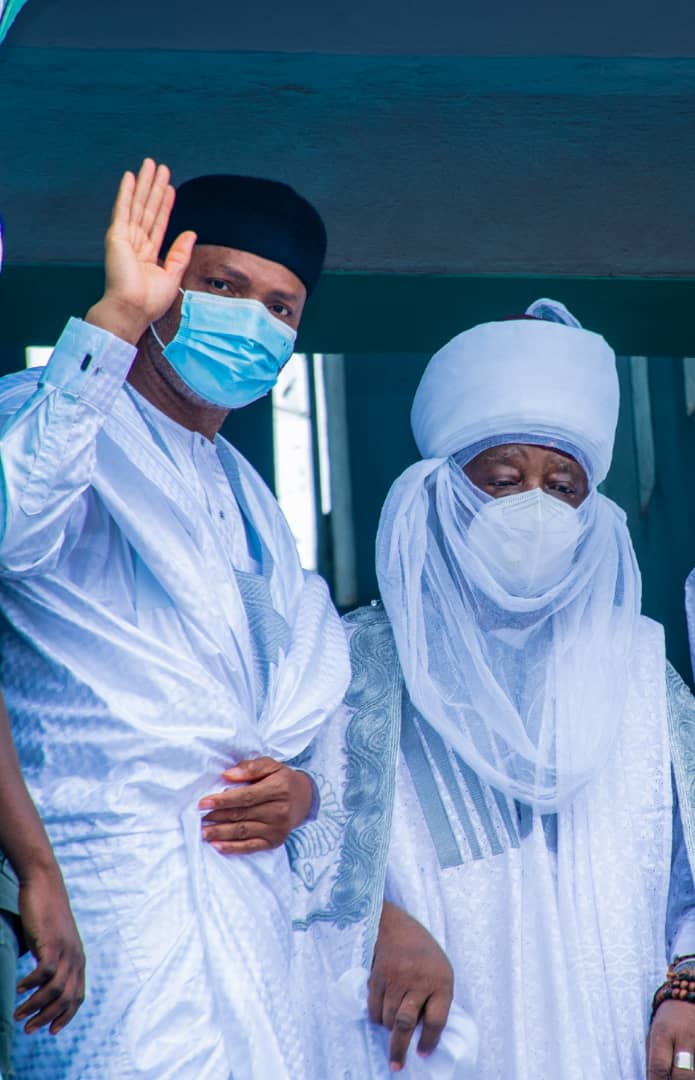 Last Thursday was an unusual but a great day in the recent annals of Ilorin Emirate. It was a day full of vitalities with multiple events running simultaneously, yet, each turned out well. Earlier on the D-day, the Emir paid a royal visit (Bareke) to the Executive Governor of Kwara State, Mallam AbdulRahman AbdulRazaq, at the Government House, Ilorin.

Another significant event was the well-attended stakeholders’ meeting on the management and maintenance of Ilorin Central Jumaat Mosque, hosted at the Mosque by the Chairman of the Mosque’s Board of Trustees and Iyan Garin of Ilorin, Honourable Justice Salihu Modibbo Alfa Belgore, CON, GCON, former Chief Justice of Nigeria; as well as the Chairman of its Central Working Committee, who is also the Danmadami of Ilorin, Alhaji Shehu AbdulGafar, OON.

The monarch and his guests were also entertained at the forecourt of his palace at which another phase of the history of the southernmost Emirate began.

The previous day, which was designated for the 3rd edition of the Ilorin Emirate Grand Durbar, was marked with mixed feelings. This was because of the suspension of the durbar by the Kwara State Government as a result of security concerns. So many people had anticipated that this year’s durbar would be really grand.

But on Thursday when the Emir returned to the palace from the Government House, Ilorin, where he had gone to pay the traditional sallah homage to His Excellency, the Executive Governor of Kwara State, Mallam AbdulRahman AbdulRazaq, he and his entourage were treated to multidimensional entertainment. It was in the course of the colourful event at the palace that the Emir announced the conferment of honorary traditional titles on nine very distinguished sons of the community.

Quite a number of indigenes, residents and friends of Ilorin were impressed with the appointments of those gentlemen as they have paid their dues to the community in one way or the other.

But of all the announcements, that of Mallam Saliu Mustapha as the fourth Turaki of Ilorin, was the most instructive, thus this spotlight. This may partly be informed by the manner in which he has registered himself in the consciousness of the people as a patriot and philanthropist of note in the last few years.

It should be noted that the title of Turaki Ilorin was a creation of the second longest reigning Emir of Ilorin so far, Shaykh Sulu Gambari. It was created in 1963 and the first holder was the late Alhaji Sanni Olanrewaju Buraimo Okin, OFR (1910-1972).

The second holder of the title was the community’s most influential politician and philanthropist of all times, Dr Olusola Saraki (1933-2012). Dr Saraki dominated the sociopolitical life of Ilorin Emirate and Kwara State like a colossus that he was.

The second republic Senate Leader, who held the title between 1974 and 2006, was directly succeeded by his son, Dr Bukola Saraki, a former Governor of Kwara State and the immediate past Senate President of the Federal Republic of Nigeria. The younger Saraki held the position between 2006 and 2018 when he was made the Waziri of Ilorin again in succession to his father.

The new Turaki of Ilorin shared many attributes with all the three previous holders of the title. He was neither born nor raised in Ilorin just like his distinguished predecessors. He is also a politician and an accomplished businessman like them too. The handsome Mallam Mustapha is also a philanthropist of note.

Like the previous holders of the title, no project or programme has been undertaken in Ilorin in the last few years without his meaningful input. He also contributed millions of Naira towards the running of the Ilorin Central Jumaat Mosque, and he is not stopping.

He has also extended his generosity to the annual Ilorin Emirate Durbar festival like no other individual. Several socio-cultural organisations of the people of Ilorin Emirate have also attracted his support through mind blowing donations.

And in “emulation” of his predecessors, he has also secured a comfortable place in contemporary national politics.

Saliu Mustapha is in his 40s just like his last two predecessors who were also conferred with the title in their 40s.The former Senate Leader became the Turaki of Ilorin at the age of 41 while the immediate past Senate President took the position at the age of 44.

One other thing that stands Mallam Mustapha out among the other new title holders is that he is the youngest of them all. He is 49 years old.

The title Mallam Mustapha holds in Ilorin was made famous by three great Nigerians such as the first elected President of Nigeria, Alhaji Shehu Usman Aliyu Shagari,GCFR, who was the Turaki of Sokoto between 1962 and 2018 when he died; the second republic Senate Leader, Dr Abubakar Olusola Saraki,who was the Turaki of Ilorin; and the first elected Vice-President in the present dispensation, Alhaji Atiku Abubakar,GCON (b. 1946) who was the Turakin Adamawa before his elevation to the title of Wazirin Adamawa in 2019.

Mallam Mustapha, as Turakin Ilorin, is endowed with qualities required of whoever would serve as “a leader in the world of business” in Ilorin Emirate.

He is a gentleman and a patriot who truly deserved the title that he was conferred with. The only challenge is for him to continue to live up to the expectations of not just the Emir but also the people of Ilorin Emirate.

This is because more than ever before, Mallam Mustapha will now be recognised as a leader in the community. I urge him to be conscious of the yearnings of the people and ensure that the people of Ilorin are not disappointed by his words, actions and inactions.

I must say that, with the appointment, he has also lost his privacies. He is now confirmed a public figure and a “public property”. His statesmanship has been affirmed and secured by the coveted title he has been conferred with. He must strive to remain a real statesman as he has always been.

I sincerely congratulate Mallam Saliu Mustapha and all the new title holders for their selection for the honours among several qualified and equally compatriotic indigenes of the Emirates. I wish them a very peaceful and progressive tenure of their various offices.