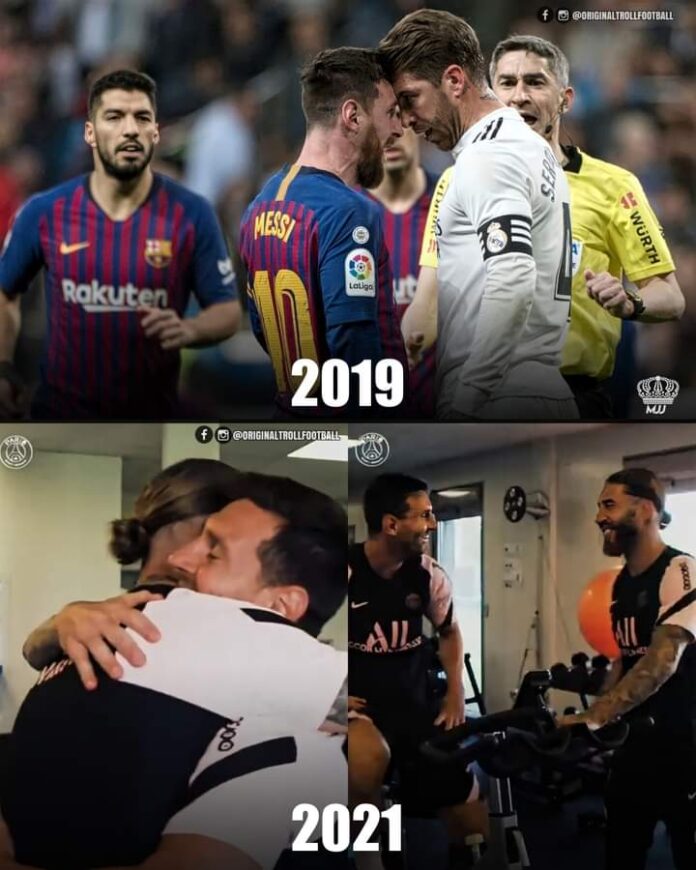 “This is quite a game, politics. There are no permanent enemies, and no permanent friends, only permanent interests” — William Clay

Unlike us, in Nigeria, where shifting alliances might indicate the construction of strong opposition coalitions, but the ever-changing political field presents challenges for building good governance, football world has one of the best transition of players from arch-rivalry teams to be housed in another but single team — a transfer reality many pundits wouldn’t have foreseen.

Most recently, football confraternities witnessed, yet, another shocking decisions from the management board of two foremost football clubs in Europe — Real Madrid FC and Barcelona FC. Conditions to stay with a club till eternity is never going to be sealed but certain players had vouched to stay with some particular teams that made them all they have got. Ryan Giggs of Manchester United or Fransisco Totti of AS Roma are examples to mention but few. Would you have imagined Sergio Ramos and/or Lionel Messi leaving their most favourite clubs same transfer window period and importantly, joining same club?!

The showdown in El-classico will find way, if not in another long time, to produce theatrics like Ramos-Messi, and Ronaldo-Pique — Surely, the philosophical, “keep your friends close but your enemies closer”, is important to note. At times, it would be easier to live happily again, if your friends turn enemies and your enemies turn friends — the two players to me, registered their loyalty to their previous clubs in the most iconic, bravery and unalloyed ways respectively. How could a player — Sergio— who from few seasons ago would have wanted to send his opponent — Leo — to eternal rest off the pitch by using crutches, if not wheelchair, come in terms to house his seemingly uncommon enemy in Paris?! Lessons abound!

They both left football analysts, writers, pundits and fans in confusion as the decisions weren’t comfortable to the duo either but they have no choice. Several football confraternities from the recent updates are a lot like Lagos’ iconic yellow danfo minibuses—swerving erratically, bulging as too many riders squeeze inside, their drivers’ clinging vise-like to both steering wheel and wads of currency notes. Playing with Sergio, should Leo be worried or will this pact—like a Lagos go-slow—generate a lot of noise but no forward momentum?

Winston Churchill once said: “This is not the end. It is not even the beginning of the end. But it is, perhaps, the end of the beginning.”

More lessons embedded in the recent switch. I wonder if that transition happens in our political parlance in the state (fix the players, please) and how the atmosphere would have been. Most people, especially, youth have sold their hearts and brains just to show loyalty to politicians. In the end, since it is not abomination to switch, the honcho switches but the twerp loses. I have heard people vouching to die just for a political course — Death is a difficult subject. We don’t like to think about it, talk about it, plan for it or campaign about it. Widely acknowledged to be as inevitable as taxes, it is tax, not death, which gets all the political attention. Painfully, if you die today, the politicians you died for will continue with their political pursuits.

What Ramos-Messi iconic theater does prove, however, are two different things: they were forced to decide against their wills despite all the odds therein and how fluid political loyalties in Nigeria have become. With barely a second thought, politicians routinely defect—’decamp’ or ‘cross-carpet’ in local parlance—in pursuit of new opportunities and financial resources. As a result, parties lack any discernible ideology or set of values other than a desire to hold on to power: a situation that begets poor governance and a corrupt political culture. As elections approach, it will be increasingly difficult to keep track of Nigeria’s shifting constellation of political elites whose favorite saying—“in politics, there are no permanent friends and no permanent enemies”—should give any meaningful Nigerian a pause