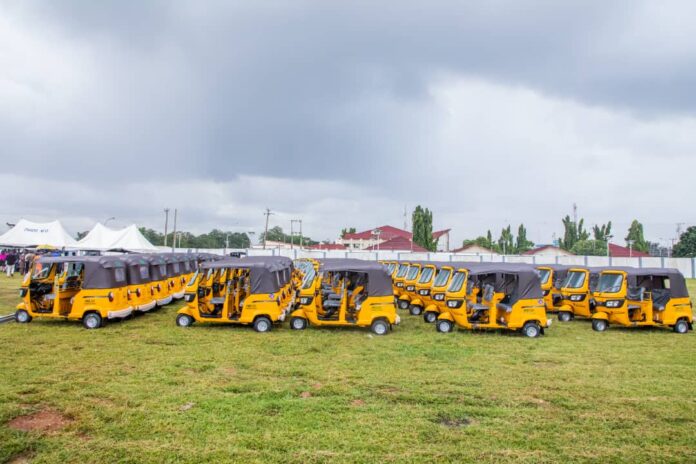 The government also officially enrolled members of the Tricycle Owners Association of Nigeria (TOAN) on the informal package of the state’s health insurance scheme — a step the body hailed as beneficial while also commending the Governor for granting them official recognition.

“Today, we are launching 100 tricycles which our government guaranteed for members of TOAN. This is done through a partnership with SEAP Microfinance Institute, SIMBA/TVS, and TOAN. I commend all of you for this hugely beneficial partnership,” AbdulRazaq said at the launch of the 3-wheelers held at the Government House Ilorin.

“A major fruit of this partnership is the enrolment of TOAN members in the Kwara State health insurance. The health and economic benefits of this insurance cannot be overemphasised.

“Our profound appreciation particularly goes to SIMBA/TVS for the 12 month warranty in the tricycles and offer of free service for the same period. I also commend the firm for its decision to locate your Service, Sales, and Spares Centre in Offa in Kwara State. The attendant economic benefits of this step will be huge, and we promise to support you every step of the way.”

The administration had also implemented four major programmes and interventions that are meant to save jobs, create jobs, and prevent the people from falling into destitution, AbdulRazaq said, referring to some initiatives funded under the Kwara State Social Investment Programme.

“These interventions included government’s soft loans for traders, transporters, and grants running into millions of naira for dozens of victims of ENDSARS riots. We have also granted non-interest loans to 170 young people to strengthen or get their businesses started. We have offered similar supports for farmers,” he added. 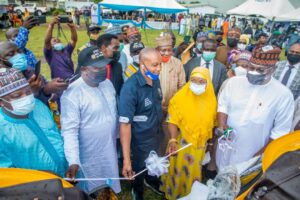 AbdulRazaq congratulated beneficiaries of the first phase of the community transport intervention project and urged TOAN and other transport unions to continue to work with the government on the strategy to ensure coordination, safety, and general security.

Senior Special Assistant to the Governor on Community Intervention Kayode Oyin-Zubair, for his part, said the community transport intervention project is a direct response to the request from TOAN members, saying the intervention is a total departure from the traditional empowerment programmes.

“Each beneficiary has committed themselves to an equity contribution. We have agreed with SEAP Microfinance that all equity contributions will be refunded to dutiful beneficiaries that completely liquidate their credit under the 18 months tenor of this intervention. Apart from the insurance on their vehicles, we have equally enrolled all beneficiaries with Kwara State Health Insurance Agency,” Oyin-Zubair said.

“We are supporting the state government to strengthen public-private partnership. We decided that most of the people rely on government and that has been draining the limited resources of the government. So, we thought to put money that the government is supposed to give them and whoever made full payment will get the money, make some savings and get another tricycles,” he said.

Chairman Tricycles Owners Association of Nigeria Alhaji Saliu Gidado applauded the government of AbdulRahman AbdulRazaq for its interventions and for approving the certificate of the association to operate as Tricycles Transport Service provider under the state Ministry of Works, saying previous efforts to be independent like any other unions Kwara State had proved abortive.

“Today is also a landmark in the history of Tricycle Owners Association of Nigeria in Kwara State, because this is certainly the first time any government will be doing this for us. This will go a long way in ameliorating the sufferings of the masses in the state in terms of transportation,” the chairman added.