The most dependable drug without a negative anyone in the world could trust is exercise. And it’s widely believed that the only way to sure wealth is keeping good health. A World Health Organization (WHO) statement does confirm this “Get at least 150 minutes of moderate aerobic activity or 75 minutes of vigorous aerobic activity a week, or a combination of moderate and vigorous activity. The guidelines suggest that you spread out this exercise over the course of a week. Greater amounts of exercise will provide even greater health benefit”.

It’s now a great task for every one of us to support and give solidarity to every movement that prioritises our health status as if it were theirs. Consequently, I bring you glad tidings from the University of Ilorin from an organisation that wants us to be healthy as long as we’re alive!

Yesterday, 4th September, I joined hundreds of Unilorites and other people who prioritised their health more than you could imagine at the university gate. From the University, we journeyed to the school stadium – brisk walking, slow jogging, and some stretching exercises are what we engaged in through the journey. As cool and “leg work” music continues to blast from the speakers, there was also a provision for first aid in case of any emergency – to God be the glory, there wasn’t any case of emergency. 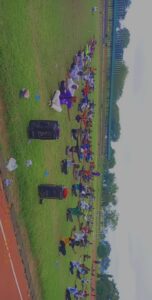 Now, you would wonder what had brought me to the event in the first place. Was it a coincidence? Was I looking for an avenue to burn some fat? Was I supposed to be on campus that very early on a Saturday morning had it not been for “CARDIO-WALK,” which was organised by the Exercise Is Medicine executive of the University of Ilorin branch. Yes, it wasn’t a coincidence that I joined like minds from across the length and breadth of Ilorin to engage in an event to improve and enhance our health status.

And then, what is Exercise Is Medicine? Exercise Is Medicine (EIM) is a sports activity that was specially designed to strengthen the life of participants – physically, mentally, psychologically, emotionally and socially. EIM is an initiative of Akorede Kehinde Monsuru, who is popularly known as Ambassador Korede. EIM was initially established in 2014 before it was officially launched in 2016 with support from prominent individuals in the university as at then which include but not limited to; Mr. Titus, Eedris Sanni, Maliq Adigun, Abogunrin Ibraheem, Adesoji Orimoloye, Bello Yaseer, Abdulwahab Mumeen, Abdulkarim Aisha, Khadijah Climax and Ayomiku Zahirah.

After EIM was launched in 2016, it was officially sponsored by 2016/2017 Nigeria Union Of Education Students Association executives led by Comrade Snazzy. The program received massive supports from students; more importantly, the backing received from lecturers was encouraging, and obviously, a key point in the drive for EIM to secure its stay on the campus. The support of EIM life patron, Associate Professor T.O Ibraheem, Professor (Mrs.) Dominic, Dr. S.T Bakinde, Dr. M.G Aina, Mr. Adeoye, Mr. Afeez, Mrs. Dauda and Coach Sabo are the names of the lecturers that comes to mind.
Since its inception in 2016, EIM has had four coordinators; Akorede Monsuru was the pioneer coordinator. He was succeeded by Abdulhafeez Akogun before he was also succeeded by Liadi Sarafadeen, and the program is currently headed by Osuolale Jamal Adeshina.

EIM which started as a university program in 2014, has radiated as one of the biggest exercise programs in Nigeria. Over the years, EIM, in its quest to maintain a balance and sound healthy living of an individual, taken the gospel to various cities across Nigeria. The program has gained an audience in Iseyin, Ogbomosho, Osogbo. EIM is growing not just as an exercise program; it’s also giving people the chance to explore nature; hiking experience has been organized in different locations in Ilorin; Sobi Hill, and Royal valley estate, to be precise.

EIM is never a one-off program. It organises exercise sessions every Saturday of the week at the main bowl of the University of Ilorin. Why must you live a sedentary lifestyle for six out of seven days a week and still find it so difficult to shake it out in a day. You needn’t have so much experience, really. Exercise Is Medicine University of Ilorin chapter is here to help you achieve that beautiful and healthy lifestyle you so desired!

Lest I forget, the current coordinator of EIM, Osuolale Jamal Adeshina, isn’t just a passionate fitness instructor. He’s a man who understands all that is required to achieve optimum performance. In fact, EIM can’t be in safer hands. Unilorites and general should be thankful that we’re in worthy and safe hands. For every Saturday of the week that we will be witnessing, henceforth, if you don’t make it to EIM, you’re not right; maybe, you may be wrong.