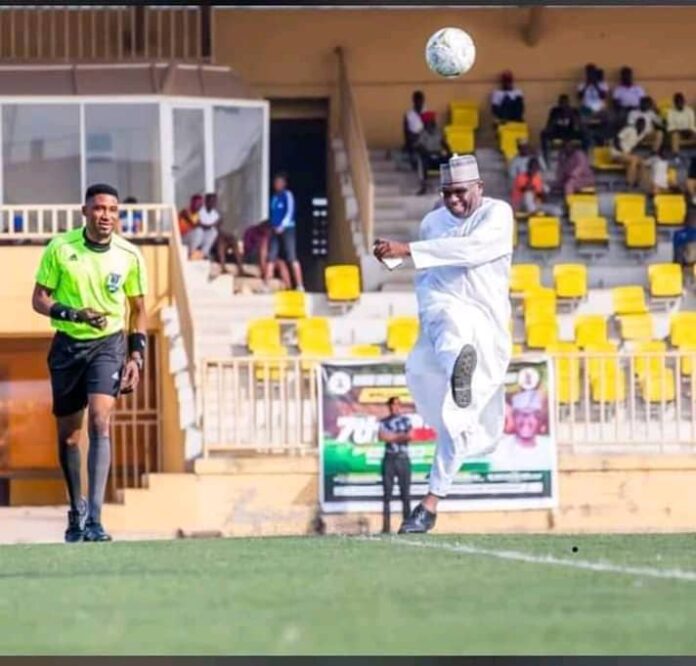 Kwara over the years was known for exceptional performances in sporting activities in Nigeria. Such activities include, Squash, Weight Lifting, Table Tennis, Handball, Hockey, Gymnastics, Athletics amongst others.

In those era, 70’s – 90’s specifically, Kwara State is a team to beat, most teams were always nervous to meet Kwara athletes at any stage of a competition – because Kwara athletes are fearless, highly skillful, talented and disciplined. This glory is gradually being restored!

The restoration of the new odds is the talk of the town in the sporting community, especially with the creation of the Kwara State Sports Commission with a team of professionals and enthusiasts ably led by an erudite Sports Icon, Mallam Bolakale Adisa Magaji.

One of the talks of the town is the recent public statement of ex-President of Nigeria, Chief Olusegun Aremu Obasanjo at the just concluded Olusegun Obasanjo Open Squash Game in Abeokuta. He said Ogun State is eager to take over from Kwara State as the champion of Squash in Nigeria. Kwara State has historical footprint in squash sports which is dated back to 1977 – came to limelight in 1977 during the sports festival and this status remains till date.

Kwara State government is making a massive investment in sports infrastructure to productively engage the youth and make the state a centre of attraction for national and international sport championships.

Kwara Governor, Mallam AbdulRahman AbdulRazaq’s effort in the sporting sector is not unconnected with his long time passion for grassroots sports development. AbdulRazaq himself is not just a sport enthusiast, he was an ex-athlete who represented Kwara State in many competition outside the state.

Interestingly, before he became the governor of Kwara state, he has been supporting Kwara athletes in his own capacity as a private citizen without fanfare in terms of welfare, kits, travel fare (when traveling outside the state) etc. He was doing all that with his personal funds, therefore, having the official capacity as the chief executive officer of the state one should not expect less.

The re-introduction of Kwara sports festival, after 15 years of abandonment helped in preparing Kwara contingents for the 2021 National Sports Festival in Edo State hosted earlier this year where Kwara State for the first time in the recent history of the state qualified for six-team sports at the National Sports Festival. Kwara athletes performed marvelously and won several medals in various events.

In addition to the re-introduction of Kwara State Sports Festival after 15 years of abandonment, the governor has also prioritized the upgrade of sporting facilities in the state. This administration inherited a shameful sporting arena, these challenges are presently being address bit by bit. The facilities currently undergoing a facelift and at various levels of completion are Swimming Pool and Squash courts. Rehabilitation of Baseball and Handball courts are completed and ready for use. The rehabilitation of other facilities are in pipeline. The construction of additional eight (8) new courts are also ongoing, upon completion, Kwara State will become the first city with the most concentrated squash facility of international standard in Africa. This is an unprecedented stride in the global sporting community.

For the record, magnificent edifice which was built in 1977 by the then Military Administrator of the state, Brigadier George Innih (retd.) the main bowl was the only facility that received government attention under ex-Governor Dr. Abubakar Bukola Saraki and was completed by ex-Governor Alhaji Abdulfatah Ahmed leaving out other facilities. The indoor sports hall not only had many of the railings and ceilings as well as the paints rusted away and fallen, reptiles now inhabit some of the facilities. It was also noticed that the seats had become traps as many of them had their sitting tops removed which could harm unsuspecting fans who sit on any of them. Also, an offensive smell oozed from some sections of the complex thereby endangering the health of people who work or walk within the surrounding.

For the first time in many years, Kwara United football club moved from being a relegation team to finish at the top four of the Nigerian Premier League during the 2020/2021 NPL season. The players were fantastic, they gave their best to get that feat. Kwarans are proud of them and urge them to do well in the coming season to commensurate the unfluncinhing support the club is getting from this administration.

Kwara Football Academy is a place to look out for under this administration. The Academy just got a new acting administrator to steer the affairs of the business-driven establishment. The academy was gradually dying before the coming on board of this administration. Since, 2019 to date, the academy is gradually getting its fading glory, for the first time in the history of the establishment remitted training compensation on one of his ex-players to the covers of the state treasury!.

The academy has also hosted at least two teams of foreign scouters, one from Kauno Zalgiris football club, Lithuania and the other from Southampton both from Europe. Two of the academy products are now in Lithuania (Kauno Zalgiris FC), Four more are perfecting their documents to join the Southampton club side in Europe courtesy of state government, this is to promote exceptional talents to stardom. Kudos!

Under AbdulRazaq’s administration, almost every week Kwara athletes are in one part of the country representing the state, showcasing their talents and skills and winning medals for the state and making name for themselves in various sporting event. There is now an increasing number of trainees on training grounds, they get more serious with their training sessions and always optimistic that they will attend competitions unlike some years back that Associations and coaches struggle to get fund to sponsor state athletes. It is no longer business as usual.

This shows the governor is passionate about sports development in the state. You have somebody who is a sports person, you can see the impact all around the stadium. I am aware that some of the facilities we are renovating have never been renovated before.

It is no gainsaying that no governor had ever given priority to the renovation and repositioning of the facilities and initiated new ones like Gov. AbdulRazaq when completed, the facilities would help develop the state’s athletes and they would compete with the best hands in the country.

In other hand, when completed, would help attract competitions from outside the state, thereby boosting the state’s internally generated revenue (IGR).

The political will of AbdulRazaq led administration to rejuvenate the sporting sector is commendable. Since the inception of this administration serious commitment is being made to motivate the athletes and coaches to enhance performance and results and it the believed that this would enable Kwara State to reclaim her lost glory in the global sports map.

Young people will be inspired to go into sporting activities once the facilities are fixed.