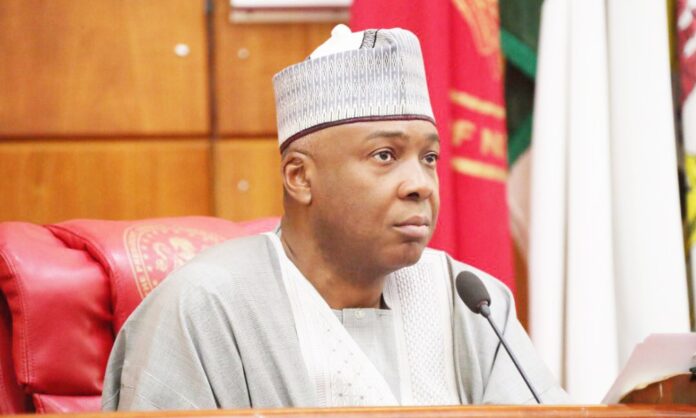 By Adetola A. Kehinde

Your Excellency, I respectfully write this humble open letter to praise your bravery in speaking up against any perceived attempt to do anything without your say-so in Kwara State, especially if it affects properties owned by the public that your father “willed” to you. This letter is borne out of your recent viral Twitter post on the decision of the Ilorin West local government to renovate a library built with public funds but named after your dear father of blessed memory, Senator (Dr.) Sola Saraki in Kuntu area of Ilorin. To renovate that structure, which had become a shadow of its old self and had had its windows removed by hoodlums who were already doing all sorts of things there, the local government administration began the demolition of the structure.

Your Excellency rightly got mad at such derring-do. You were right, Your Excellency. Don’t mind that rude local government TIC chairman of Ilorin West. He should have written to you to get a permission to do anything on the said public library since it is part of your inheritance. Why should anyone take such a step without first telling you that they wanted to renovate the building? Silly.

You see, your excellency, this library was actually constructed by Ilorin West Local Government with public funds in the early 2000 long before you stepped your feet on Kwara soil. But, typical of official personalisation of public properties when Oloye was in charge of Kwara as well as during your dreadful reign as Kwara emperor, it was labelled Sola Saraki Library. Over the years however, under your vice-like grip of Kwara (2003 to 2019), the facility suffered neglect and became decrepit. Students were no longer using the place. It became some hideouts for thugs and drug addicts. Your Excellency is quick to throw your love for Oloye Saraki in our face as a good son. But that library lost its essence under your nose and you did nothing to it is what you should be ashamed of. It became a den for social miscreants. Right under your nose. What did you do to show your great love for your father?

Maybe you were right not to do a thing on it since it is a public property. But it shocked me and others to see you shed crocodile tears when the owners of the facility, the local government, brought it down predatory to giving it a facelift and restoring its glory. Could it be that all you care about is playing politics with the memory of Oloye?

Some people have said you did not at any time buy or donate a book to the library which you feel so nostalgic about as a legacy of your great father. I told my friends this cannot be true. Or is it, Your Excellency? They said the upkeep and funding of the said facility had always been the responsibility of the local government. Some of them are saying now that you have a sense of entitlement and that you cannot live with the reality that Kwara is not one of your inheritances. Me I told them this cannot be true but they said the way you carry your shoulder and talk about Kwara gives the impression that it is your property. They even mentioned Ile Arugbo land. They told me you woke up one morning and your administration dashed out public land to your late father. When the new administration in the state recovered the land, they said you said it was father’s property and that you have a legal title to it. I said that was true. Then they asked me that you have been running from pillar to post when the government challenged you to bring the said title.

Another thing they said is that Your Excellency appears to always confuse public assets with your family fortune. They said several government properties were named after your father even when you set out deliberately to wipe out the legacies of your predecessor, Mohammed Lawal. Does Your Excellency remember the ubiquitous Up Lawal water tanks across the whole of Ilorin metropolis that you changed to Up Kwara? Do you remember how vehicles the Lawal administration purchased for NURTW and the latter branded Up Lawal were converted to the personal private company with the names of Lawal obliterated? Did you forget how the beautiful ‘Up Lawal Garden’ inscriptions were chiselled out by your men?

I do not support personalisation of public properties. So, that is fine if Your Excellency also shares this sentiment. But our people say you practically railroaded various public offices to name public properties/edifices after you, your father, and your followers without giving consideration to the founding fathers of Kwara State. Your Excellency, sir, so bad was it that you named two different roads after your father: Olusola Saraki Road at Olorunsogo and Olusola Saraki Road (Fate). They asked if your family is the only one in Kwara. In fact, they continued, your Excellency changed the name of the only state university, KWASU, to Olusola Saraki University as if Kwara begins and ends with your family. They said your administration refused to even name Stadium after Rashidi Yekini, a football legend of all time, despite all pleas. Your Excellency, they even reminded me how you succeeded your sister as senator while your late father worked so hard to make the same sister the Governor.

Against this background, Your Excellency, our people felt your attacks on the state Governor was uncalled for and an insult on the intelligence of Kwarans especially that this is a property of a local government and not your family estate. But some of them insist that you are not convinced yet that there ought to be a limit to entitlement mentality which seems written in your intervention on the renovation of the library.

Sir, they said you should do well to focus on the Sola Saraki Education Foundation which was launched on 17th May, 2017 but with no beneficiaries so far. On that day Your Excellency, you promised that an academic research in the field of medical science will funded alongside the endowement of a professorial chair in medical discipline and an establishment in Kwara of a specialist hospital focusing on heart-related diseases.

They claimed that the foundation exists only as a rented structure without staff or anything else. To be taken seriously, Your Excellency, our people said you should focus on making these laudable agenda of the Foundation a reality as that would be a befitting legacy a son could give his father.

Just before I draw the curtains for another moment, Your Excellency, like other football loving Kwarans, when you announced that your football club would be renamed from Bukola Babes to Abubakar Bukola Saraki Football Club, I thought it would be named after your father, unfortunately you didn’t. So, I ask why haven’t you found it worthy no name a self-sponsored edifice or project after late Dr. Olusola Saraki?

Thank you, Your Excellency.