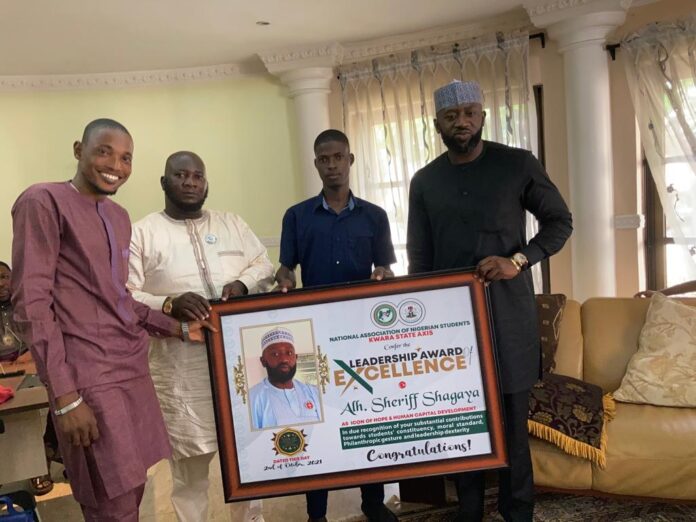 Chairman Salman Shagaya Foundation Alhaji Sheriff Shagaya was on Saturday honoured by the National Association of Nigerian Students Joint Campus Committee in Kwara State as an Icon of Hope for his investments in social and youths empowerment in the state.

He was described as a ray of hope for the weak and less privileged people, who should be emulated by businessmen and political leaders in the state.

The students body also announced plans to host a leadership retreat in his honour later in November, bringing together young people for discussions on enterprise and leadership.

“We bestow on you the honour because you truly deserve it. Your impacts are clearly felt by the people, especially the students and youths. There are only a few who do so much for the state as you are known for. We hear testimonies from all kinds of people who have benefitted from your generosity across the three senatorial districts in the state. Kwara would be better for it if we have more of your kind. The entire Kwara students are proud of your accomplishments in business and enterprise and are indeed motivated by your philanthropic efforts. We thank you dearly for being selfless and supportive of our agenda for growth and development,” Kwara NANS JCC Chairman, Comr. Saleeman Yusuf remarked. 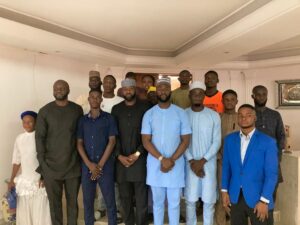 Shagaya in his remarks lauded the leadership of NANS for their innovative programmes and responsible conduct as a students body.

He said the NANS and other youths organisations in the state are key to his vision for the social and economic growth of the state, promising continued support for youths and women development.

“I thank the association for this award of recognition. It is a pointer to our growth over the years as a foundation in helping the people in our own little way. We will not stop at any time,” Shagaya said.

“It is always a delight to share a quality time with young people. I am also a relatively young person. At 41, I am one of the youngest CEOs in the oil sector. We get to learn from one another. We need more of that to bond and build a network strong enough to make bigger social and political impacts we desire.

“Such is the reason why I recently launched the Sheriff Shagaya Movement. It is meant to be a platform for young people to network and organise to actualise their political dreams. We need to discover and produce quality and responsible ones from our fold and rally round them. Such is the practical way to gain the power to actualise a big scale change in the system.”

Shagaya urged the students across Nigerian schools to shun drug abuse and vices that can damage their health and dreams.