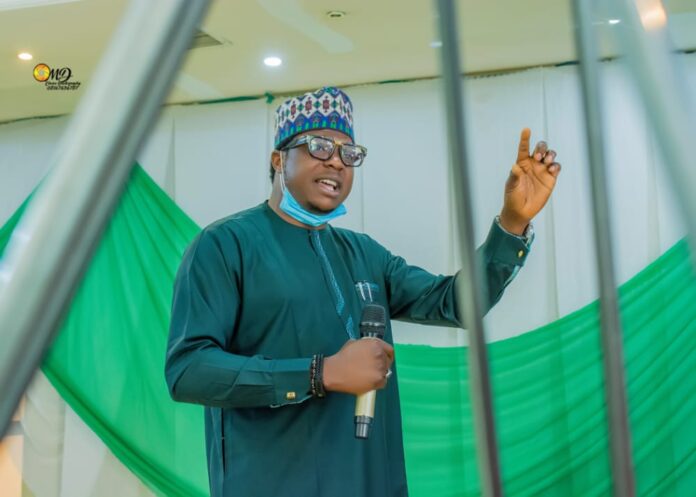 ‘Does he get tired?’ This is one poser that frequently runs through my mind whenever I see Mallam Abdullahi Abdulmajeed, Group Managing Director and Chief Executive Officer of Harmony Holdings Limited committing uncommon energy and zeal into whatever he does. He rarely carries the demeanor of a tired person, even after hours-long engagements and activities. It’s from one hours-long activity to another.

When some of us that are much more younger are already getting tired and weary, Abdulmajeed just finds his own strength and vigour. You then begin to think that he has two lives. And if, of course, there are values I personally have learnt working closely with this juggernaut, they are hardwork, tenacity and the can-do spirit. He is, to put it concisely: the textbook example of hardwork and tenacity. A workaholic.

December 1 marks the birthday anniversary of the indomitable GMD/CEO. And as it is customary of well-wishers, I wish to pen some lines to share my thoughts, offer best wishes and celebrate our ‘oga at the top’.

My introductory paragraphs, I think, capture briefly the hardwork side of Mallam Abdulmajeed. Now, tenacity. You see, Harmony Holdings which he heads is a ‘state’ on its own. The lily-livered cannot endure leading the company going by its antecedents and structure. Abdulmajeed inherited Harmony Holdings with a battered public reputation/perception; tons of hanging litigations; decrepit subsidiaries; huge debts and obligations across board. And to compound the situation, the resources to make everything come back to shape are scanty. Accepting to head such a company is therefore like entering the lion’s den. It takes uncommon courage and tenacity. But here he is, rewriting the narrative at the company with little resources, against all odds.

Take Kwara Express, one of our subsidiary companies, for example. It was completely decayed. When Abdulmajeed began his reform agenda at the age-old transport company, do you know the bad names he was called? Blackmail here and there. Propaganda. Insults. And whatnot. His ‘offense’ was his vision to turn around the fortunes of the company. A lily-livered person would have just succumbed to the coordinated mischief and campaign of calumny. But did he bat an eyelid? No, the GMD/CEO just carried on with uncommon tenacity and we’ve begun to pluck the low-hanging fruits of the reform in Kwara State. But then, according to him, the reform process is still at the embryo stage. What we are seeing is the tip of the iceberg so to say. Really?! This is the same Kwara Express some people have completely lost hope in its revivification. But it is happening, right in their faces. A new, conducive, one-of-a-kind passengers service terminal. Digitized operations. Enhanced customer service. Plugging of leakages. What made these possible is the tenacity that the young executive/investment facilitation chief possesses.

So also is the Harmony Insurance Brokers (HIB). Its own story is that of grass to grace. It used to be a ‘bench warmer’ in the league of subsidiaries at Harmony Holdings Limited. After getting the Midas touch of Abdulmajeed, HIB is now posting profit after running on loss for years. Staff welfare in the company has increased as they got some reasonable percentage raise in their pays under Abdulmajeed’s leadership. All other subsidiaries are work in progress. They will definitely find their feet in the chase for stability with the innovative reforms ongoing at each of them. As I always note it’s one step at a time. Slow and steady wins the race.

I move to generosity and largeheartedness. Abdulmajeed is on top. He’s in the calibre of personalities the Yorubas would say in one of their hyperbolic cliches that they can gift out their eyeballs. The Harmony Holdings boss is always ready to lend a helping hand, even to people unknown to him, once it’s within available resources and capabilities. He in most cases gives and does not make noise about it. What he has done in his community (Offa) is huge and impactful despite not being an elected official.

Just this year, in the month of Ramadan, the GMD/CEO made a giant step to institutionalize his charitable spirit by establishing a Foundation which was unveiled by His Royal Majesty Oba Muftau Gbadamosi Okikiola Esuwoye II, the Olofa of Offa. In its flagship community intervention which was in honor of Abdulmajeed’s boss, Mallam AbdulRahman AbdulRazaq, the Executive Governor of Kwara State, the Foundation made marks in educational scholarship for less privileged students; health insurance for the aged; cash presentation to the aged and persons living with disabilities. Hundreds of people benefitted from these initiatives. The Abdullahi Abdulmajeed Foundation is primed to be a household name in Offa, Kwara, Northcentral and Nigeria as a whole. God willing.

A former student/youth leader (having served as President of foremost youth group, National Youth Council of Nigeria), Abdulmajeed is also intellectually stimulating. There’s never a dull moment being with him. Every audience with the policy wonk is an avenue to learn new things. He has the gift of the gab. He wows his audience with his inspiring, lively and insightful presentation. Curiously, he has an idea about almost everything. Agriculture, business, politics, governance, education, religion; name it. Then, his recollection power and retentive memory are just superb. He narrates events as they went, hardly missing out any detail. He is just ingenious.

I should not end this tribute without stating that he is a very disciplined and principled person. A no-nonsense man, yet affable, amiable and exuding a high sense of humor. Indeed, there’s a lot to say about him, but I preserve it for subsequent times. I wish the GMD/CEO longer life in good health and prosperity on this occasion of his birthday anniversary. May his labor not end up in vain for he has been showing the will. And as the Almighty promises: where there’s will, there’s way.

To cap it all, Governor AbdulRazaq must be appreciated for giving young persons like Mallam Abdulmajeed the platform to serve the state and contribute their quotas to state development. It’s unprecedented in the history of governance in Kwara State that young persons and women hold key positions. This is a fine development that has bolstered the confidence of the youths and placed them on their toes. Commendable.