The Kwara State University, Malete will churn out a total of 6,620 graduates at its combined 8th and 9th convocation ceremonies, with 98 students to be awarded the first class honours.

Prof. Mohammed Mustapha Akanbi (SAN), Vice-Chancellor of the University made this disclosure at a press briefing on Monday heralding the week-long activities of the convocation. 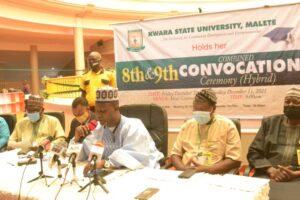 “Kwara State University has zero tolerance for indiscipline and misconduct. All cases of indiscipline were investigated and appropriate punitive measures were taken against students found guilty of such offence,” Prof. Akanbi stated.

He also hinted that the institution had relieved Pelumi Adewale, a lecturer in the Department of Medical Laboratory Science of his appointment after he was caught in the middle of a sex scandal. Adewale had threatened to fail one of his female students should she refuse to sleep with him.

”The security agency has taken up the case and it is in court already. The man is now an ex-staff member of the institution. He is a disgrace to our great institution and we won’t condone such acts,” the VC said.

KWASU meanwhile kick-started the week-long convocation ceremonies with a Science and Arts Exhibition. The event was witnessed by principal officers of the institution, top government officials and prominent education stakeholders.

The grand day for the convocation ceremonies has been announced to be Friday, December 10th. According to KWASU VC, only First Class graduands, a few Second Class Upper graduands and Prize Winners will be admitted into the University’s Mini Convocation Arena for what was called a ‘hybrid’ convocation as a way of preventing the spread of the COVID-19 pandemic.

“Due to the prevailing situation with respect to COVID-19 and the need to observe non-pharmaceutical protocols in the prevention of the spread of the virus, all the ceremonies will be conducted in hybrid mode. Therefore, only First Class graduands, a few Second Class graduands and Prize Winners will be allowed into the University’s Mini Convocation Arena for the conferment of degrees on Friday, December 10, 2021. All other graduands will join virtually wherever they may be,” the VC stated.

The Ravens NG learnt that the management has provided limited outside broadcast at venues distant away from the Convocation Arena for parents and visitors to the University.

During the Science and Arts Exhibition, graduating students were allowed to display their academic and innovative skills to the public.

Prof. Akanbi acknowledged the research and technological breakthrough of the University as two students, Abdulzahir Okinobanyi Usman and Israel Oluwagbemi under the supervision of Prof. AbdulGaniyu Alabi designed and constructed a light aircraft.

The one-seater turbo propeller engine aircraft is set to attain an altitude of thirteen thousand feet (13,000 ft), at 200km/h speed. Among other laudable achievements is the Boeing 737 fuselage that houses the main fuel tank in a way that reduces any explosion in the event of a crash.

The Vice-Chancellor however lamented the insufficient funds to fast-track the projects at hand and then called on the government to provide grants as these inventions might contribute immensely to the economy of the country.