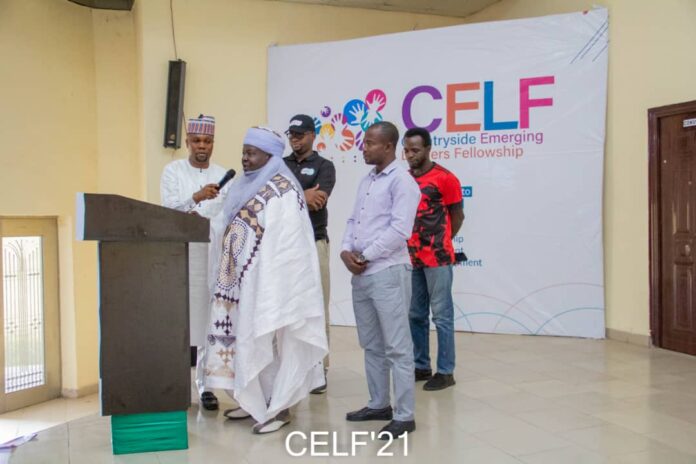 The Emir of Ilorin, His Royal Highness, Alh. Ibrahim Zulu Gambari has declared full support for the Countryside Emerging Leaders Fellowship (CELF), noting the project has his royal blessings.

The monarch also commended the Kwara State government for supporting the 2021 edition of the CELF.

Represented by the Secretary of the Alangua/Magajis Forum of the Ilorin Emirate, Alh. Umar Kayode Sidiq, the Emir made the commendation during a courtesy visit on fellows on Thursday.

According to him, “For quite sometime, we have not had anything such as CELF. I therefore commend the Kwara State government ably led by Mallam AbdulRahman AbdulRazaq for its support towards making this year’s edition very colourful.

“A community development intervention such as CELF is worthy of being supported by all and sundry. And on behalf of the Ilorin Emirate, we assure the organisers and fellows all year-round support and royal blessings.”

Also speaking at the event, Chairman of the Alangua/Magajis Forum and Alangua Opolo, Alhaji Zuluqorinaini Abdulraheem encouraged the fellows to cultivate the habit of reading, saying that it would make them to be better informed about new ideas and new perspectives. Alhaji Abdulraheem advised the fellows to take advantage of the fellowship and be more committed towards giving back to their communities.

In his remarks, the National Publicity Secretary of the Ilorin Emirate Youth Development Association (IEYDA), Alhaji Muhammad Uthman Jagunma commended the efforts of the convener, Mallam Lawal Olohungbebe and his team for the initiative and pledged the support of the association to the fellowship. He thereafter announced prizes for the outstanding fellows, including food items and packs of water.