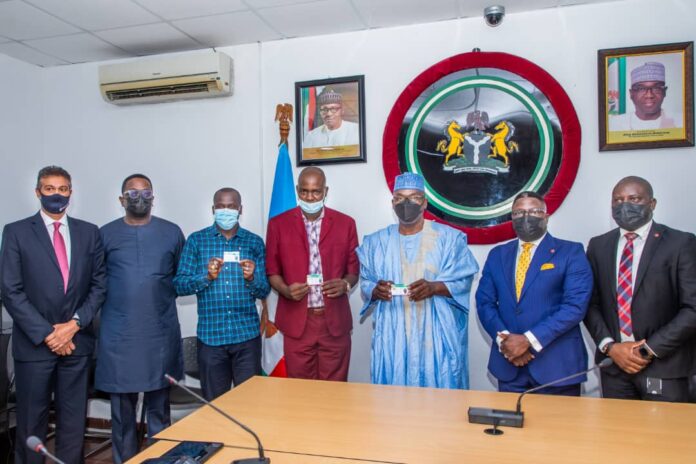 Kwara State Government has introduced cards for residents of the state, with Governor AbdulRahman AbdulRazaq saying the effort would drive “effective planning, judicious allocation of resources, and sustainable growth and development.”

The Governor said this at the unveiling of the state’s residents registration agency (KWASRRA) and the Kwara State Residents Card project.

He also announced that the state has secured two major partners — Data Mining Company of Nigeria and Sterling Bank Plc —for a project that the Governor said would make Kwara a leading state in data-driven governance.

The Governor said the initiative, the commencement date of which will be announced, would be a sure-footed response to security concerns as it will harvest relevant details of all residents to help government plan for the future and to prevent and fight crimes.

“The lack of reliable data is a great drawback for effective planning. The step we are taking today is our response to the imperatives for accurate information about every single person that resides in our state and how to plan for their needs in every way conceivable,” AbdulRazaq said.

“Under the Residents Card Project, residents of the state will be registered through biometric, so that data so collected and collated will guide developmental plans and public policies.

“The scheme will register and create unique identities for about 3million Kwara residents through the KWASRRA in this phase.

“This project is a partnership between our administration, Data Mining Company of Nigeria (DMC) and Sterling Bank Plc. The funding for the project, including production of the multipurpose card, comes essentially from the DMC and Sterling Bank Plc with relaxed repayment modalities. We thank them for the confidence reposed in the state and its people.

“Government will guarantee the enabling environment, logistics and the buy-in of all necessary stakeholders and the generality of our people for a successful exercise.

“When operational, it will be mandatory for anyone wanting to access government services to have the card. The card will be linked to all government’s services and programmes like social investment programmes, education and health services, land matters, micro loan, pension scheme, transport services, among other things. We seek public support for this important project which will help the government to better serve the people.”

“Under this scheme, all residents of the state are to present themselves for registration through the Agency, after which a resident card will be issued to each registrant. Registration under this shall be mandatory for all residents (in line with the law),” he said.

“To achieve this, the agency plans to deploy a technological solution which is able to store all residents’ data on a chip card, guarantee unique identity numbers attached to residents’ bio-data. The technology under reference is adopted because of its unique flexibility and capabilities that allow data verification and payment processing in both online and offline areas.”

Jimoh said the benefits of the initiative include that data collected with the residency card be a reliable method of authenticating and identifying residents, determine and allocate resources to formulate and implement policies, projects and programmes, help to integrate the residents of the state into e-government initiatives of the administration.

DMC Development Director Femi Akande said the dual access card with multiple security features that would be issued is the first of its kind in the country, saying the initiative comes with huge benefits to the state and its people.