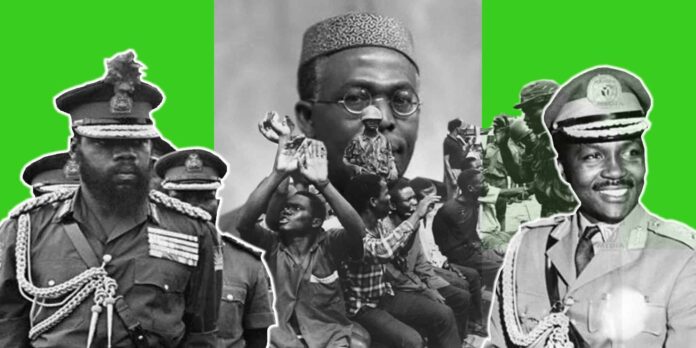 The race for an independent Nigeria started quite well on a good note of trust, unity and morally justifiable cause. Dr Nnamdi Azikwe from the East, Alh. Ahmadu Bello and Alh. Abubakar Tafawa Balewa from the North, Chief Obafemi Awolowo from the West were amongst the prominent, noble and dedicated citizens who led the movement for an independent entity we have today.

What way could the situation be described when an Easterner, despite in the face of the already existing Northern power, became the president and Alh. Tafawa Balewa took power as the Prime Minister, if not dedication and selflessness to a united country, devoid of ethnicity, tribalism or religion.

Then, the sad incident occurred that left tears and memorable events in the lives of many to date. Even those not birthed at that time wished it never occurred. Just as Chinua Achebe’s book, ‘Things fell apart and were reasonably beyond repairs for the secessionist state of Biafra led by late Lt. Colonel Odumegwu Ojukwu from July 6, 1967, to January 15, 1970, and Nigeria as a whole.

Biafra represented nationalist aspirations of the Igbo, who thought continuous coexistence with the Northern-dominated federal government seemed unrealistic. Though, this could be said to have resulted from political, economic, ethnic, cultural and religious tensions which had preceded the British’ formal decolonization of Nigeria.

Major causes of the war included ethnoreligious riots in Northern Nigeria, a military coup, a counter-coup and persecution of Igbo living in Northern Nigeria. Control over the discovered lucrative oil production in the Niger Delta region also played a vital strategic role.

Breach of national unity laboured for by the early fathers and mothers was bade farewell at the very sunrise of the success of the struggle. Every individual is very much interested in his gains and his people’s without care for others. Allocation of national resources is drawn along ethnic and tribal bigotry without concern to what united us from inception.

But if the civil war had not occurred, without mincing words, our dream of a united Nigeria devoid of tribalism, ethnic favouritism and religious sentiment would have been realised to a large extent, if not fully, as pictured and laboured for by our early fathers. Till this moment, years after its occurrence, no better word to describe our situation than retrogression.

The statistics of the casualties and victims recorded to show what is left of a nation that was once united upon a just cause for a better tomorrow. According to the Encyclopedia of War and Encyclopedia of Contemporary Genocide, military personnel killed ranges from 45,000 to 100,000, about 2 million perished from the naval blockade, more than 2 million got displaced from their homes and close to 3 million became refugees.

The dilemma the country found itself which has kept hunting it would have been averted if the war never happened or better still the situation was arrested diplomatically. The simple truth all must take into cognisance is that the war did not solve the existing problems, rather created more unsolvable ones which every Nigerian would suffer from one way or the other.

The marginalisation clamoured against by the Igbos back then is obviously on the high side which has led to the recent call for secession or even restructuring.

A major outcome of the war is tribal and ethnic intolerance. History has in detail that being a Nigerian is key and important than where you come from or what tribe you belong. Before the war, Nigerians from the north comfortably lived in the south without hiccups and crises similarly a westerner in the east and vice versa. Post civil war era has exposed Nigerians to numerous inter-tribal and inter-regional clashes which had claimed the lives of many and led to the destruction of properties.

Why would a Nigerian exhibit hatred instead of love to his fellow citizens, if not as a result of previous experience? Families, relatives and associates of the victims of the war would not have the trauma and dilemma go by easily mostly when they come in contact with an individual from the conflicting tribes or ethnic groups who brought the pain over them.

Reading Chimamanda Adichie’s ‘Half of a Yellow Sun’ and its movie adaption would leave tears in one’s eyes and leave the comment, “war was not made for Nigeria” on the lips. Famine and poverty found their way and dominance in the land despite unrestricted availability of mineral, material and agricultural resources.

The agony, pain, dilemma, suffering, death and unsolvable continuous problems, which came to the limelight would have been averted if the civil war never happened.

Indeed, according to Chinua Achebe, ‘there was a country’.