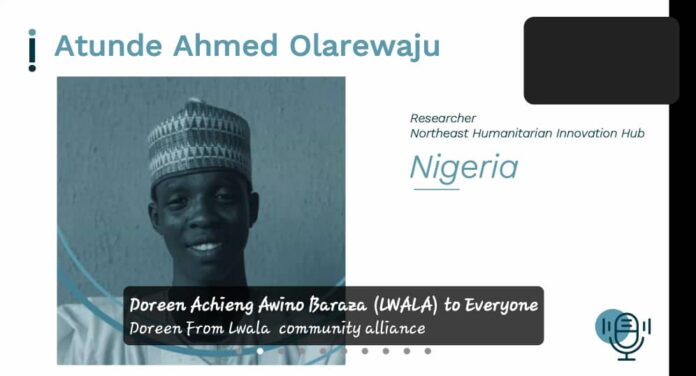 Atunde Ahmed Olarewaju has said that the knowledge of contraceptives among the female population is an important component of maternal health.

Atunde made this statement while participating in the Global Health Open Mic session where he joined global leaders in the reproductive health industry to speak on maternal health issues.

The virtual convergence of frontline health workers was organised by ThinkMD, an eHealth company working on enhancing health care decision making through the use of data.

As a researcher working within the Nigerian Conflict Zone, Atunde spoke on the knowledge of contraceptives among women and girls living in the Boko Haram affected region of Nigeria.

He said that nearly 35 million people have been displaced within the zone since the terror attacks begins in 2009.

“After 12 years people who have been dispersed from their homes remain scattered within IDP Camps and thousands of mini-settlements within the affected states,” he said.

“As an important component of maternal, newborn and childbirth health, the knowledge of contraceptives among the female population is important to the population health of the zone. Reproductive health is in turn a component of the redevelopment whose absence will forfeit efforts made by social engineers working in the affected region.

“Studies within the Northeast communities have indicated that the knowledge of contraceptives is low among the women and girls in the region. This lack of information about contraception methods flows from the low level of education in the Northeast region being exacerbated by terror attacks that left the schools inaccessible.

“The cultural practices of people living in the region are also a causational factor hindering the spread of the knowledge and practice of contraception in a region. The women are under the pressure to give birth to more children, especially those in the polygamous families.”

Atunde explained that community engagement has successfully been used as a tool for cultural shift in the region, noting, “the inclusion of the community in educational initiatives to exacerbate the practice of contraception will have a more positive effect on people, particularly women and girls.”