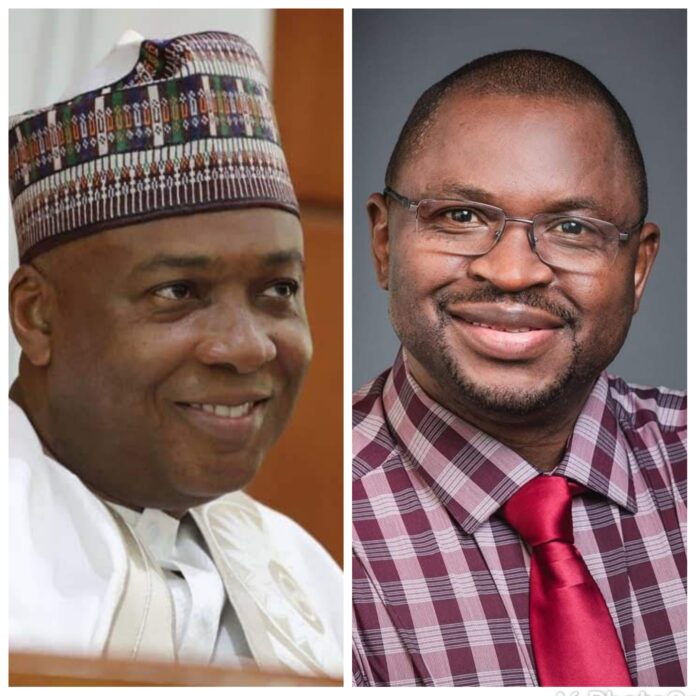 Onemola in a rejoinder to Kperogi on his latest article titled, “A President Saraki Won’t Pay Federal Workers’ Salaries” described the Atlanta-based scholar as an attack-dog of Mohammed, calling the latter to put a leash on him.

Professor Kperogi has written two major articles critical of Saraki’s presidency, where in the first he accused him of engineering a ‘419’ consensus arrangement, and in the second, said he will be a presidential disaster.

Both Kperogi and Mohammed hail from Baruten, Northern part of Kwara State. Mohammed who had once served as commissioner is also a gubernatorial aspirant on the platform of the Peoples Democratic Party (PDP) in Kwara State.

In his rejoinder, Onemola wrote, “It is obvious that this self-conceited lecturer, Kperogi, lives in faraway Atlanta and specializes in spreading outright falsehood in other (sic) to prosecute his proxy war. If he is as influential in Kwara politics, as he thinks he is, he should come down to contest the election as a candidate or let his chosen candidate from Baruten move into another party to contest the governorship. Kperogi’s candidate who many in Kwara State believe is Mr. Zakari Mohammed, a former member of the House of Representatives from Baruten Local Government Area can then challenge the one that Kwara PDP will eventually present. Then, the people of Kwara State will freely decide their preferences.

“This Mr. Know-All lecturer should stop hiding behind one finger. He should openly declare his interest and put his money, influence, voice, and written words behind his candidate. Then, he will know the real worth of his rantings. It may also be good, at this point, for one to also call out Zakari Mohammed to put a leash on his attack dog. The rabies-infested dog seems to have gone mad. It has become what the Yoruba people call ‘Digbolugi’. He may soon turn on his handler as well. A word is enough for the wise.”

Reacting to the claim of Onemola however, Zakari Mohammed in a statement personally signed by him said his loyalty remained with Bukola Saraki whom he hailed as a selfless leader.

He called Onemola a feeble-minded fellow and busybody who is out to cast aspersions against his person and political career.

Zakari said though Kperogi is his kinsman, he did not sponsor him to write against Bukola Saraki.

“I do not see the struggle for power as a do-or-die affair. I won’t because of zoning formula jettison Dr. Bukola Saraki who supported my career from being a Special Assistant to a Commissioner and a ranking member of the House of Representatives. At a point, I was (still I am) one of his trusted lieutenants,” the release by the former House of Representatives member read partly.

“A busybody like Onemola should look elsewhere to cast aspersions on. I am not Prof Kperogi’s employer hence he doesn’t take his briefs from me. I did not covertly or overtly engaged him to write against Dr Bukola Saraki and Saraki dynasty that I’ve been a part of for over 2 decades. Nobody took me to Bukola Saraki, destiny did, that is a story for another day. I don’t destroy what I build. As a professional broadcast journalist who practiced for 14 years and among the hands trained by the BBC, and who has uninterrupted access to Dr Saraki, I don’t need write ups to reach him. Similarly it is insulting and rude to refer to me as Kperogi’s candidate. Mind you, two of us from Baruten are vying for the governorship why single me out because you have a mission against me. Olu and your cohorts, you cannot malign or break me. I am standing on the pedestal of Allah which does not tremble nor crumble.”