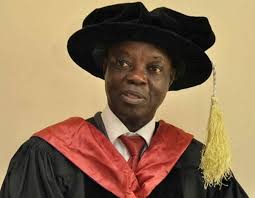 There is a popular saying that every beginning must have an end.

In roughly four months from now, the five-year single tenure of Prof. Abdulkareem Sulaiman Age as the Vice Chancellor of Federal University of Ilorin, Unilorin is gradually coming to a glorious crescendo.

The smooth-talking and sparkling Professor of Chemical Engineering was appointed in 2017 to lead the by far the best, the better by far University of Ilorin to greater heights with his academic and administrative acumen.

Our renowned researcher was picked having towered above other candidates at the interview and screening.

So one would be rest assured that Age is worth the salt to have taken over the mantle once saddled by this men of impeccable pedigree and character.

Under his stewardship, the university developed and became a reference point for other universities in kwara state and beyond.

Prominent amongst them is the recently appointed first female Vice Chancellor of the Federal University of Technology, Akure, FUTA, Professor Oladiji, a Fellow of the Nigerian Academy of Science, and in fact the very first female Fellow of that academy.

One of the legacies Age is leaving behind as he rounds off his tenure is his dedication to the completion of all projects.

As earlier said, Age bucked the trend by not leaving behind abandoned projects as inherited.

When Age mounted the saddle in October, 2017 he inherited many ongoing projects, chief among which is the Faculty of Environmental Sciences main building housing Departments of Quantity Surveying, Estate Management, Architecture, Urban and Regional Planning and Surveying and Geoinformatics which he has completed and is now in use.

One of Age’s legacy projects is the construction of the state-of-the-art 1500 capacity lecture for the Faculty of Engineering and Department of Chemical Engineering which I was privileged to be a member of the team overseeing the project before I left having put the project at an advanced stage.

Age created different committee to serve as an interface between the contractors and the school during the project, apart from the Projects Monitoring Committee who randomly visit all ongoing projects unannounced.

He didn’t leave the monitoring to the committee alone. He also always drove in to monitor during weekends and pretended as a passerby whilst also asking questions.

More striking is the culture of broad consultations he has introduced to the university administration.

In recognition of the importance of giving back to the host community, he has started and completed a state-of-the-art Community Development Centre in the University.

In showing his admiration for his children — the students — he has also started the expansion of the Directorate of Students Affairs and clinic.

Age in consonance with his humble background doesn’t blow his own trumpet because he believes it’s against the principle of Nemo Judex in casua sua- No man can be Judge in his cause.

He has done his bit and has his fault prominent of which is the making the University of Ilorin join Academic Staff Union of Universities, ASUU which has thrown our 10 years of interrupted academic stability in the air which everyone including this author does not appreciate.

That is why we are, and we must, and will continue to shout and demand that all wrongs be righted now before it is too late, as he bids the institution farewell – if it is not too late already.

Bagbansoro Uthman Olamilekan ([email protected]) an Alumnus of the University of Ilorin writes from Abuja.