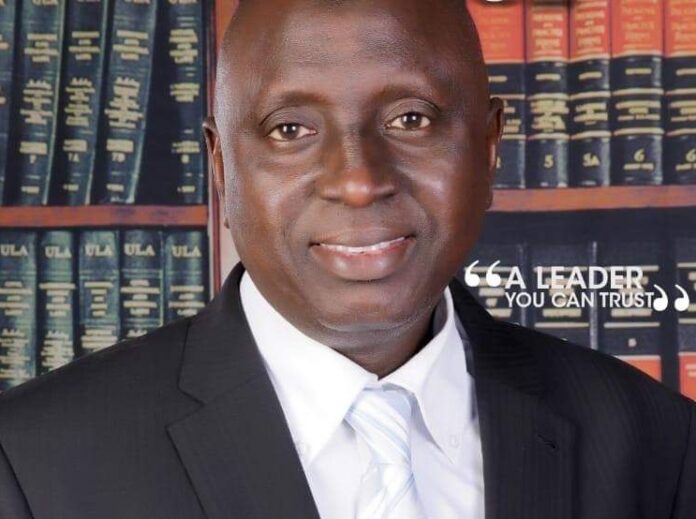 Senator Ibrahim Yahaya Oloriegbe who is representing Kwara Central at the National Assembly has refused to move on since the outcome of the primaries of the All Progressives Congress (APC) where he lost out. The incumbent senator came a distant third; Amb. Yahaya Seriki was the first runner up; and the Turaki of Ilorin Mallam Saliu Mustapha outshone all of them to be the winner of the primary election. Though Senator Oloriegbe quickly put out a press statement where he congratulated the Turaki on his victory, it appears that it was just some stunts as he has not been able to match his words with actions. He has been making caustic remarks about not only the flagbearer but also the Kwara State Governor AbdulRahman AbdulRazaq.

Like a typical gentleman that he is, the Turaki is not on record to have demeaned Oloriegbe or passed snide comments on him, even when he was contesting the senate seat against him. On the contrary, he has always made it clear that Senator Oloriegbe is doing well, but he is ready to do better. Dr. Oloriegbe is however not returning this gesture, he has been bent on bringing down the whole roof just because he didn’t emerge in the contest. He has condemned the process, labelled the governor, criticised the flagbearer. He forgot that many people also had to make sacrifice for him to be on that seat today.

Oloriegbe was on Channels TV the last time where he made several wild allegations and called the governor several names. He also came back home yesterday where he continued his campaign of calumny and blackmail against the party structure, among others.

To be clear, if the primary election were conducted several times, Senator Oloriegbe would still not have emerged as a winner. He came a distant third with few votes. Amb. Yahaya Seriki who came second in the election has since moved on. He has pledged support for the Turaki who is the candidate. So, why is Oloriegbe still bitter? He has not been handling his loss very well, and it speaks so much about his emotional intelligence. He is expected to have been doing some soul searching, instead of the brickbats he is throwing and mudslinging he is indulging in.

Some of the aspirants at the House of Representatives level have moved on. Mohammed Brimah, a man younger than Oloriegbe, has moved on with his life. He’s not letting all hell loose. Jimmy Idiagbon, also a young man, has moved on and gone back to his business life. Sa’adatu Moddibo-Kawu is taking the dignifying route of the law court. She is not making noise. It is only Oloriegbe who has remained bitter all the while. He has claimed that he’s not being placated. How do you placate a man that is being bitter and refused decorum? The Yorubas say, ‘omo to ba sipa ni iya e a gbe’.

That other aspirants are not making noise as he’s doing gives a lie to his claim that the olive branch is not being extended and peace-building efforts are not made. For crying out loud, Yahaya Seriki came second in the contest. He had his reservations too, but is now back in line. He has met the candidate, and pledged to work with him. APC is bigger than anybody.

There is no injustice that could be more than that done to MSM buildup to the 2019 election where he was wrongfully disqualified on radio. If he had put up an adversarial posture like Oloriegbe is doing today, the mission to take power from the Saraki dynasty may not have been rosy. Even Oloriegbe won’t be standing as a senator that he is today. Why is Oloriegbe behaving as if the senate is now his birthright? Who signed the pact that he must do a second term with him? Does his whole life depend on the senate seat?

He should pick lessons from the respected Asiwaju Bola Ahmed Tinubu he is making noise all about to be supporting. Asiwaju has made so many sacrifices before he could get to this point. He’s still making sacrifices. If Asiwaju had inordinate ambition and is bitter like Oloriegbe, there won’t be APC today. Does Oloriegbe even know that he is making anti-party comments already, with his claim to be for APC at the national level but not state level? And that a vote for APC in Kwara Central means least representation for the district. His behaviour can never be tolerated in Lagos APC where Asiwaju is one of the leaders. The party will always remain supreme.

Oloriegbe should slow down. There’s more to life than the senate seat. Politics is all about winning some and losing some. In fact, nobody loses anyway if we can all work together. It’s a win for all. His latest outbursts are not dignifying of the ratings people give him. A stitch in time saves nine.

Ali Abduljelil, Political Science Department, University of Ilorin. He can be reached on [email protected]