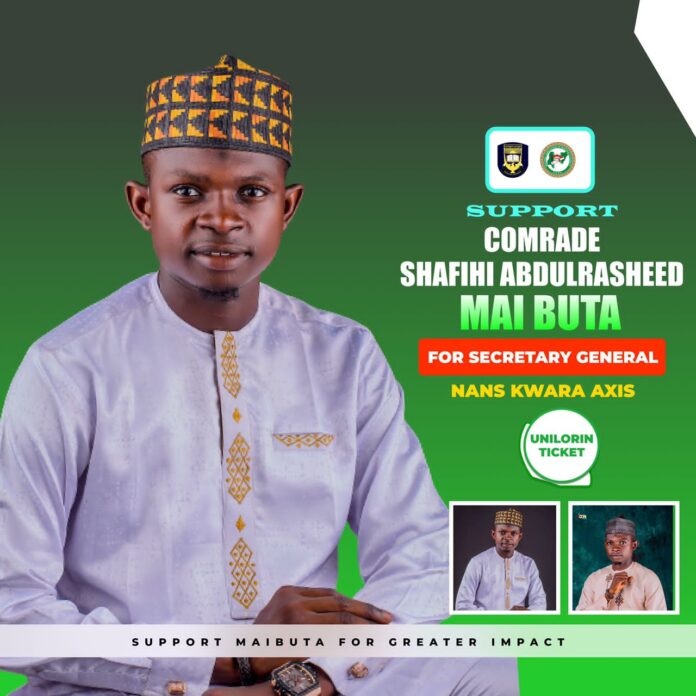 Comr. Shafihi who is a penultimate student of the Department of Sociology, University of Ilorin made this know via his declaration of intent released on Wednesday 21st September, 2022.

Comr. Shafihi recounted his achievements as Director of ICT of the association saying, “It was a very big honor to serve as the Committee Member, THE ACME MAGAZINE PUBLICATION, this offered me the opportunity to submit my intellectual contributions to the prevailing cyber criminality in our society.”

“It is also important to put on record that I closely monitored and supervised the one-month intense training on Web Design and Digital Marketing that was organized for 50 students in Kwara State. In the realization of the Annual Entrepreneurship Contest, I actively served as one of the panelists and technical director which transformed into the success of the exercise, and a fair one at that.”, he added.

He further explained that his estimable experience gathered so far stands him in good stead to become the next Secretary-General of the association.”

The Secretary-General hopeful maintained that for a greater NANS Kwara Axis, there is a critical need to consider an individual with promising ideas, solutions, and developmental-oriented initiatives to advance students’ well-being.

Comr. Shafihi described self an individual with readiness to make a greater impact and steer the ship of the organization’s Secretary-General office. He humbly seeks the votes of senators who are eligible voters and the support of the generality of students schooling in Kwara state to achieve a victorious end in the aspiration.