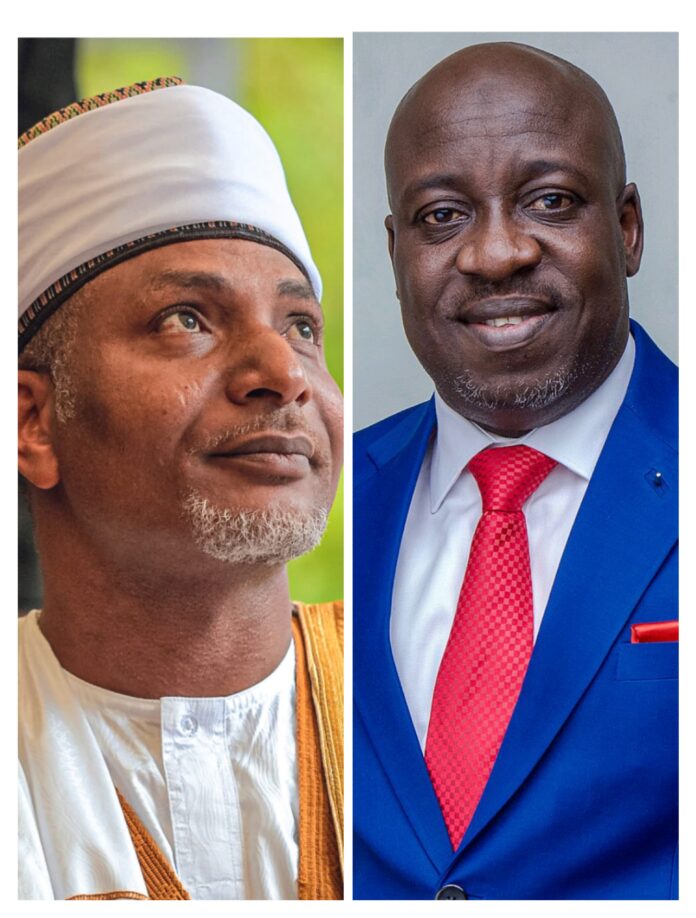 Mallam Bolaji Abdullahi, Kwara Central Senatorial Candidate of the Peoples Democratic Party (PDP), is a man who believes so much in his gift of the gab. He trusts so much in his own intelligence and has this seeming tendency to underrate everybody else. In the 2023 contest for the senate seat in Kwara Central, Abdullahi believes that his biggest strength against his opponents is that he can speak better English than all of them. So he wants debate to prove his prowess with grammar!

At the Great Debate organized by the Correspondents Chapel of the Nigerian Union of Journalists (NUJ), Bolaji Abdullahi didn’t do so well with his presentation. Why? Because his biggest rival, Saliu Mustapha whom he wanted to compete with was not there. He dropped his guard because he felt the other candidates from the Social Democratic Party (SDP) and Labour Party (LP) who turned up were not the people he wanted to compete with. He showed his desperation to have Saliu Mustapha square up with him in a debate when the very next day after the NUJ event, he caused his campaign team to issue a statement directly challenging his APC rival to a public debate. How petty!

Despite Abdullahi’s persistently calling out Saliu Mustapha and throwing shades at him at every slightest opportunity, one must commend Turaki for his dignified silence and the maturity displayed so far. A respectable man, Mustapha also displayed his trademark humility and thoughtfulness when he, unlike other candidates who simply ignored the invitation to the debate, wrote the organizers to explain the reason for his absence and offered an apology, expressing his willingness to seize any subsequent opportunity to further explain his plans for the people of Kwara Central he seeks to represent.

The whole frenzy over a debate by the PDP senatorial candidate and his team is quite a funny one because one will think Bolaji Abdullahi is competing for the post of sales and marketing rather than a Senator of the Federal Republic. Yes, a legislator needs to speak English, but often it is your effective ability to lobby your colleagues and build an effective interpersonal relationship that confers greater advantage.

How much English does Honourable Gudaji Kazaure, representing Kazaure/Roni/Gwiwa Federal Constituency in the House of Representatives speak, yet he is one of the most vibrant legislators in the Green Chamber. It’s not always about too much English, once you can speak to communicate your ideas and get the buy-in of your colleagues. In any case, Saliu Mustapha is no stranger to public engagements, including debates.

When he was contesting for the governorship ticket of the APC in the countdown to the 2019 General Elections, Saliu Mustapha took part in a debate organized for governorship aspirants at Savanah Hotels where he was rated as one of the brightest among the other aspirants at the time. Also, during his run for the National Chairmanship of the APC, he was on record to have attended several stakeholder conversations and even stood out as one of the few aspirants at the time who spoke at the Summit organized by a pressure group within the APC. He also featured in several television interviews, including ones with the biggest television channels such as Arise TV and Channels TV, among others. Turaki has shown, times without numbers, that he is no pushover when it comes to effectively communicating his views and ideas.

Bolaji Abdullahi may speak his elevated grammar while Saliu Mustapha speaks his simple English, but I am sure we only require information that helps us decide between a community man who sees himself as part of us and someone who believes we are only good enough for votes and nothing else. We need a Senator who will work with our people and not someone who will go and bring aides from Edo or Delta States because he thinks Ilorin boys don’t have the sense and do not speak good English.

The election of a Senator for Kwara Central in 2023 is definitely not a contest of grammar. It is one that affords us the opportunity to elect someone we know and who knows us. Bolaji Abdullahi is free to go around town with his debate team. This election, debate or no debate, is almost a foregone conclusion.