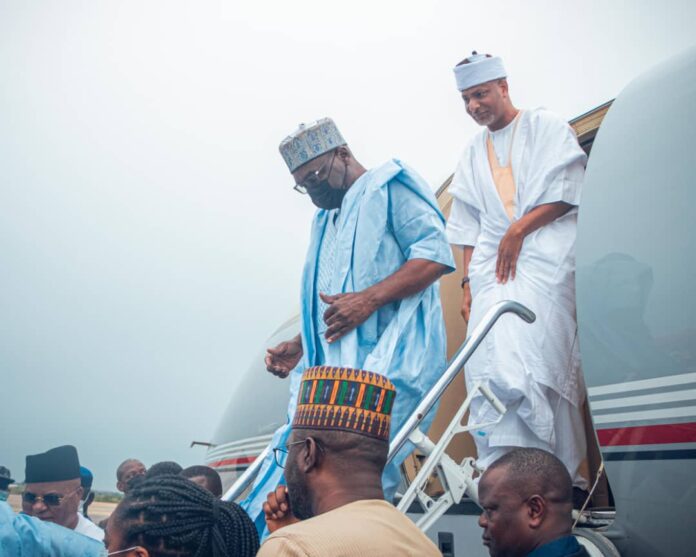 Lately, I have begun to wonder why Mallam Saliu Mustapha has come under a virulent media attacks by both his real and imaginary opponents. I have had to ask myself, why has a single man suddenly become the object of attention in Kwara politics (particularly Kwara Central) when in fact he is not the governorship candidate for this election circle?

I also observed that the incumbent Governor Abdulrahman Abdulrazaq hardly receives as much intense media attacks these days as Mustapha, except for some feeble occasional jibe from his major opponent in PDP. But Saliu Mustapha has been consistently and constantly under the hammer of opponents. I kept wondering why this was the case, until I visited Ilorin last week where I got a bit of an answer.

Quite frankly, Saliu Mustapha, a calm and calculative politician with an established pedigree as a lover of the people, one who supports them with his wealth, came into the election with a strong footing. Many who throw darts at him do so because they believe he is not just marketing his ambition, but also projecting a positive image for his party, the APC. The belief in many quarters in Ilorin today is that Saliu Mustapha is possibly the only strong obstacle in the way of the opposition.
Remove Saliu, then it becomes easy to decimate whatever is left of the APC in Kwara state.

Being not just a topmost traditional ruler in the Emirate, Saliu Mustapha also enjoys a distinctively massive love from the ordinary people, owing to his long years of consistent philantrophy. Therefore, seeing the manner the young politician is converting his massive goodwill with the people into huge support for his party, it is understandable why he would be an object of attack almost from every quarter.

The opponent of Governor Abdulrahman Abdulrazaq would attack Saliu because they feel he is beginning to give the governor a ‘mojo’ for a seamless re-election next year. Those who don’t like the face of Bola Tinubu, Presidential Candidate of the APC would also attack Saliu because they feel he is one individual strengthening the party in Kwara and would draw a significant votes for the presidential vote bank in the critical 2023 election. In fact, Saliu Mustapha now literally attracts, singlehandedly, the attacks and criticisms that should have been directed and shared equally by all the APC candidates in the election, simply because of his personality and how well he has invested in the people over the years, an investment that is now paying off with the natural love being extended to him by the majority of people in Ilorin and beyond.

If you check, the candidates for other positions across the State are doing their thing without a fuss. From Kwara North to South, across different positions, even the gubernatorial, but none is as volatile and virulent as Kwara Central where Saliu Mustapha is standing election as the candidate of the APC. This is why it is easy to see that the attacks against Saliu go beyond his aspiration to represent the good people of Kwara Central in the Senate. It is most definitely because of his being the poster boy for his party in Kwara. This is why all opposition arsenal is directed at him, the one person who stands as the shield protecting his party against the onslaught by the opposition.

However, even if nature has bestowed on him this role, it appears that Saliu Mustapha himself has not fully grasped the import of what is playing out. It is possible he still thinks of himself only as a senatorial candidate in this election. But that is far from the truth. The earlier he realizes that he is like a bulletproof for APC in Kwara, the better for him.
Unfortunately, a bulletproof, aside from protecting the wearer, also takes bullets and absorbs the heat. He must, therefore, brace up and be ready to take even more blows for the party. I do not envy that man at the moment.

Why Bolaji Abdullahi is desperate for a debate