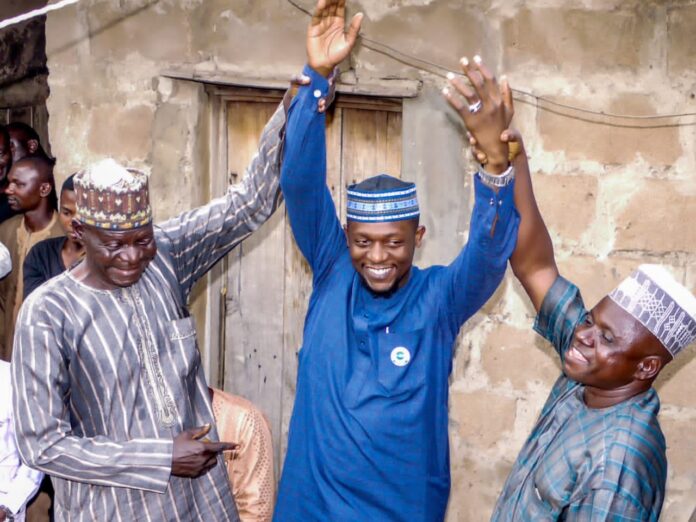 Upon assuming office in January 2017, Michael Tubbs became Stockton’s first African-American Mayor and the youngest mayor in the history of the United States to represent a city with a population over 100,000. Under his leadership, Stockton has elevated from a bankrupt city to the sixth most fiscally healthy city in the nation. In his speech, he said, “young people should be given the opportunity to lead and represent the interest of the people; he further said; youths that have impacted their immediate communities will make impacts when elected.”

Tubbs’s words above lead us to Muktar Tolani Shagaya, the latest definition of Young And Getting It (YAGI) in Kwara politics. Shagaya is one of the popular names in the Ilorin Emirate, the Shagayas from the Hajia Bola Shagaya’s wing are popular in Nigeria’s political and business space, a result of the commitment and involvement of their matriarch Hajia Bola Shagaya.

In developed nations, politicians whose families have been recreating wealth among citizens before seeking political offices are always ahead of others. Impacts on one’s community may be a deciding factor in any election. It happened in the United States Of America and the United Kingdom; former United States Of America President Bill Clinton and one-time United Kingdom Prime minister Tony Blair are living examples.

Tolani Muktar Shagaya (YAGI) is not coming as a candidate without a profile; he is coming as a candidate with a family system where philanthropists have existed over the years; this is another unique twist. Where I come from, my people would say, “owu Iya gbon lomon nran,” which literally means (the wool the mother spins, the child weaves). In this part of the world, especially in our political system, while seeking political offices, people will begin to ask questions in variations; what is your family background, academic qualifications, your level of public engagement, ability to manage people and intellectual capacity to deliver? If you ask me, I will gladly say Muktar has the right answers to the questions posed above.

As I have said, the Shagayas are not new in Kwara politics; Sheriff Shagaya, elder brother of Muktar Shagaya, have been around for a while; he has once contested an election, he lost, yet he didn’t renege on his philanthropical gestures through his foundation, that is a clear message that the family has a working system for all, like his brother Muktar, started his foundation long before he emerged as the candidate of the All Progressives Congress (APC) to represent the good people of Asa/Ilorin west Federal Constituency, Muktar have supported small scale business owners, empowered the youths constituency and he has continued to respond to the yarning of his people even as a candidate.

Although having politicians involved in philanthropy gestures is not a yardstick to measure good leadership but event around such politicians will speak the hidden truth. In politics, it’s always “I have done this VS I am going to do this” Muktar belongs to the “I have done this group”, going by his community intervention in the last few years. Donation of seven million naira for solar installation in Alapa community, donation of funds to market women and small business owners, construction of motorised boreholes across Asa and Ilorin West local governments and many more. In Lito Jadoo’s words, ‘he who has done it well with nothing can and will do it better with something.’

Muktar Tolani Shagaya (YAGI) continues to be youth friendly, catching the hearts of the youth wing through his physical engagement and public policy, attending students seminars and programs, sponsoring youths events and speaking at youth gatherings. Those steps are testifying to the fact that as a youth, he will be the friend of the youths when elected. The women’s wing is not left out; he has continued to put smiles on the faces of the women through his foundation. I have no doubt that Muktar will make a good leader if elected as the next representative for Asa/Ilorin West Federal Constituency; antecedents and track records should be considered.

Let us not forget that the essence of adult suffrage is anchored on the principle of freedom of choice. There is no morality or lack of it in a voter preferring a particular candidate to the others. It is within their prerogative of choice. No one is compelled to see ‘reason’ with anyone regarding the candidate to vote for, but a solution to a problem is in our thumb. The best candidate exists within the intent and purpose of democracy. If you ask me thousands of times, I will tell you Muktar Tolani Shagaya (YAGI) is the right candidate for Asa/Ilorin West Federal Constituency.