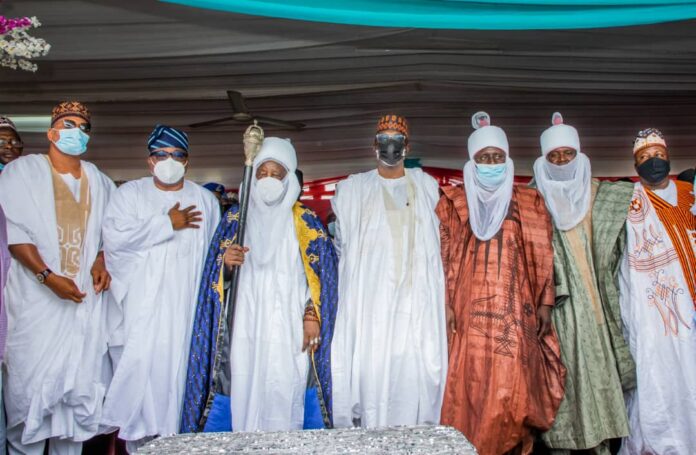 • Gov apologizes to traders, tourists, others over Durbar’s cancellation

The Emir of Ilorin, Alhaji Ibrahim Sulu-Gambari, on Thursday expressed satisfaction with the policies and programmes of the AbdulRahman AbdulRazaq-led administration, calling them pro-masses and saying the Governor is doing well.

The Emir commended the people-focused, non-discriminatory programmes of the administration and its impacts on the populace.

“Your Excellency, you have been doing well. Please continue to do well, and God will reward you abundantly for that. We want peace in Kwara State. We want peace in Ilorin. We don’t want trouble,” Dr. Sulu-Gambari said during the traditional Sallah homage (Bareke) on AbdulRazaq at the Government House Ilorin.

“We should all learn and cultivate the habit of peace and harmony. Your Excellency, you are doing alright. May God continue to guide you aright. May God be with you and live long with happiness and good results of your deeds.”

Sulu-Gambari, who said the Bareke had been a longstanding tradition of northern states, including Ilorin, explained the root of the annual event that follows Eid celebrations.

“I am very happy to be here as usual. It has been our longstanding tradition in Ilorin and all other northern states. After the Governor had visited the palace, the Emir will come here (Government House) to say hello to the Governor. British soldiers used to be here. It used to be called Barracks. That is why it is called Bareke. My forebears used to come here to say hello. The same thing is being imitated. We thank God for that. Because, a nation without history is a dead one.

“I thank everybody here for coming here for the annual event. May God make you prosper.”

AbdulRazaq, for his part, said the annual bareke underscores healthy and harmonious relationship between the traditional institutions and the government.

“This tradition underscores the healthy and harmonious relationship between the traditional institutions and the government. We cherish that harmony and the good job that the council of chiefs has been doing to promote unity and peace in Kwara State,” he said.

AbdulRazaq assured the people of the state that his administration would not relent in meeting their yearnings and aspirations, irrespective of their social status, adding that the recent video of a female pensioner was a testimonial of how the administration has changed the story of the average worker and citizen.

“Our administration is for the people. We stand for inclusive growth and development. We stand for the general well-being of the citizens. The trending video of a woman pensioner who acknowledged what we have done to change the conditions of our senior citizens is a pointer to what we represent. While that video is a good feedback on our priorities, I reassure her and all our people that we will not drop the ball. Within the resources available to us, we will not be blind to the need of any segment of our population,” he said.

On the cancelled Ilorin Emirate Durbar celebration, AbdulRazaq said the government had to bow to the superior argument of security agencies after exhaustive deliberations with the Emir and the Durbar committee.

The Governor apologized to traders, tourists and other persons who have been looking forward to the event.

“The government could not have suspended the Durbar on a whim. Not only have our people prepared for the cultural event, the government on its own had invested hugely to make it a memorable one. This is part of our commitment to promote the tradition and culture of our people across the state,” he said. 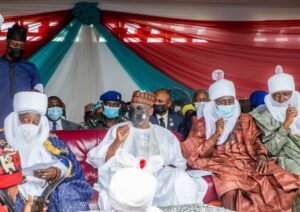 “However, we bowed to the superior argument of security after exhaustive deliberations with Your Royal Highness and the committee. So, it was not a light decision taken on a flimsy ground.

“We thank everyone for their kind understanding. We apologise to various traders, entrepreneurs and tourists who had looked forward to the colourful event. We especially commend the Durbar committee for their great efforts and patriotism.

“Like the government, I’m aware that Your Royal Highness has similarly spoken to our people on the annual Durbar that was supposed to hold yesterday.”