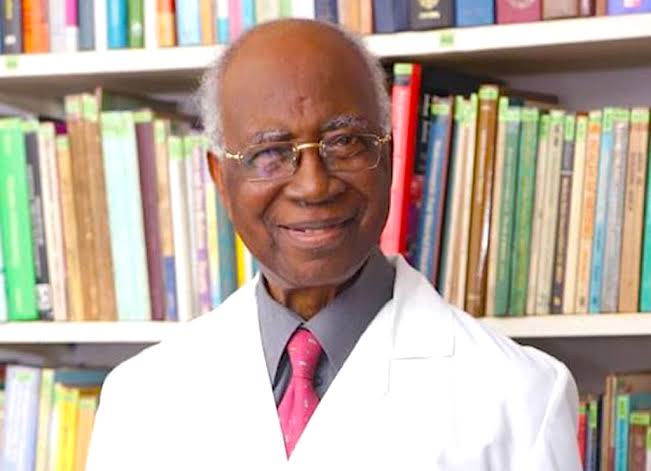 American writer and political philosopher, Benjamin Franklin said; To be remembered in the game of time, either write something worth reading or do something worth writing about, this aphorism poignantly captures the life of Ladipo Akinkugbe, Emeritus Professor of Medicine.

On June 28, 2020, I was among the first set of online reporters that broke the news of his death — which provided me with an opportunity to know about his background and his appointment as the pioneer principal and vice-chancellor of our by far the best, the better by far — University of Ilorin.

As it is my normal routine; whenever I am travelling from my homestead Abeokuta to Ilorin, I always have a stop by at Jerricho — Booksellers Bookshop — at Ibadan to get new books and also feel the fragrance of books.

As I was waiting at the cashier’s stand to pay, I stumbled upon a book titled Footprints and Footnotes an autobiography written by our Emeritus Professor.

For all that the University of Ilorin has become today, we have Late Akinkugbe to thank for all its success having been her founding leader and has sown the Unilorin’s mustard seed which has germinated into a big forest today.

Akinkugbe started the format for the University of Ilorin’s convocation lecture colloquially styled “The Ilorin Lectures” to be delivered at convocation time and the Emir Of Ilorin, Alhaji Zulu Gambari to be its main benefactor, a culture which has remained till date and has attracted world scholars.

The Unilorin’s crest which typifies the rugged transitional forest belt and savannah interphase shows an eagle looking up which was initially looking down at first design, the University has Akinkugbe’s first son, Olumide who had questioned why an eagle would be looking down.

Despite the break the University had in taking-off after her birth was truncated by the February 12, 1976 coup-de-tat which killed the military head of state Muritala Mohammed and the Kwara state military Governor, Colonel Ibrahim Taiwo, Akinkugbe was undaunted, he quickly nudged on with the new military Governor, Col. George Innih.

Emeritus Professor Ladipo Akinkugbe, whose main turf was education and medicine, understands the importance of founding fathers in the establishment of a world-class University, he has carefully attracted to the campus, a host of credible intellectuals from the Premier University of Ibadan, to help him quickly settle down administratively, having in mind that the first crop of scholars would determine the academic currency of Ilorin in the comity of institutions of higher learning in years to come.

Akinkugbe, in his ingenuity, attracted a total land size of 15,000 hectares —approximately 35,000 acres — which made the University the largest campus permanent size in all of Africa at the time, putting Obafemi Awolowo University, Ile-Ife’s boast in the shade.

In stimulating the University’s acceptance and understanding of the importance of basic education, he carved an area for the establishment of the University of Ilorin primary and secondary schools which are still functioning to date.

He also went to align with the military Governor of Lagos State, Mr Ndubusi Kanu, for a liaison office in the state, though he couldn’t complete the office due to his appointment as the first Chairman/registrar of JAMB and his transfer to the Ahmadu Bello University, Zaria, his vision for a liaison office in Lagos was implemented by his successor in office.

In Akinkugbe managerial ingenuity, he established the following; a Unilorin Bookshop; a Printery; a catering service; a University Guesthouse; Petrol Station; Bakery and University Parks and gardens which still subsist till today.

The Unilorin’s mustard seed which Akinkugbe sowed with the Faculties of Arts, Education and Sciences has now grown large to 16 Faculties and 102 departments.

Akinkugbe may not have been a prince, but he was royalty in every ramification.

It is said that when beggars die, there are no comets seen; the heavens themselves blaze forth the death of princes. The late Professor Ladipo Akinkugbe might have been gone in flesh, but his legacies are still breathing on mother earth.