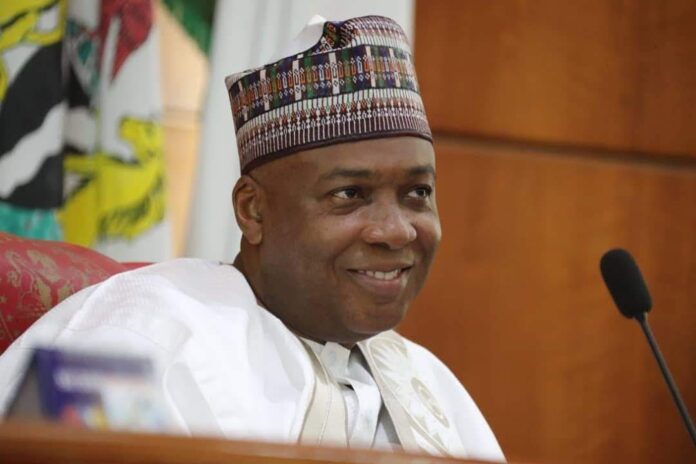 The Professor of Journalism and Emerging Media who hails from Baruten, Northern part of Kwara State, said as a Kwaran he feels “a moral obligation to warn the nation about what kind of person Saraki is outside his cunningly packaged media image.”

He made this disclosure in a lengthy article he titled, ”A President Saraki Won’t Pay Federal Workers’ Salaries”, coincidentally released on Sunday which heralds the International Workers’ Day.

Saraki is one of the aspirants eyeing the presidential seat on the platform of opposition People’s Democratic Party (PDP).

Read the full article below:

Bukola Saraki is one of the strongest contenders for PDP’s presidential nomination. On paper, his identity agnosticism (i.e., his capacity to be simultaneously a northerner and a southerner) is a great selling point, but he is, in reality, the most treacherous reprobate the party would have the misfortune to present.

As a Kwaran I feel a moral obligation to warn the nation about what kind of person Saraki is outside his cunningly packaged media image.

Saraki is an arrogant, corrupt, unfeeling wretch who, as a governor (and later a “governor general”), hardly paid workers’ salaries but who expended enormous resources to unleash sponsored media fury on workers who dared to tell the world that they were owed salaries.

People who have followed me on Facebook since 2015 will remember that in October 2015, I publicized the plight of the lecturers in Kwara State’s colleges of education who hadn’t been paid salaries for months and who, before the complete stoppage of their salaries, had endured making do with only 70 percent of their salaries for several months.

I followed up the status update with a full-length column in the Daily Trust titled “Who Will Save Kwara COE Lecturers from Saraki’s Deadly Grip?”

In the column, I wrote: “Senate President Bukola Saraki is called Kwara State’s ‘Governor- General’ for a reason: He is, for all practical purposes, the state’s de facto governor, and Governor Abdulfatah Ahmed is merely his impotent, obsequious caretaker. Ahmed must dutifully take orders from Saraki or risk losing his cushy surrogate governorship. This isn’t a flippant, ill-natured putdown of Governor Ahmed, who seems like a nice person; it’s an uncomfortable truth that many Kwarans know only too well.

“So, when I ask who will save lecturers in Kwara State’s colleges of education from death and starvation because they haven’t been paid salaries for six or seven months now, I am not barking up the wrong tree. Saraki is the main character in the movie of Kwara politics. Nothing happens there without his imprimatur.”

While Saraki and Ahmed sponsored infantile media attacks against me because of this, I did a Facebook fundraiser for the lecturers. One Dr. Nura Alkali kickstarted the fundraiser with a N200,000 donation. Several others followed.

The money I helped raise gave the lecturers some reprieve, and the publicity the gesture generated at the time shamed Saraki and his flunkey into paying the lecturers’ salaries.

This was also the story of Saraki’s tenure as a two-term governor. Salaries and pensions were never guaranteed.

Memories of Saraki’s 16-year reign of terror for workers are still so enduringly traumatizing that when I wrote a critical article against Governor Abdulrahman Abdulrazaq sometime ago (I called him a “third-rate governor”), my paternal uncle, who’s a retiree, called to tell me that my critical opinions of the governor won’t resonate with workers or retirees because the governor had never owed salaries or pensions since he has been in power, which he said was a comforting departure from Saraki’s and Ahmed’s tenures.

Imagine the depth of despair and misery people must have experienced in the past for them to celebrate a governor just because he pays salaries, which is their just and legal entitlement.

In Nigeria, federal civil servants have historically been insulated from the terror of unpaid salaries. A President Saraki would ensure that even that little luxury disappears. He is unfathomably greedy and callous.

He is also insufferably egotistical and condescending to people and groups that his sterile mind tells him are beneath him. In my March 9, 2019, column titled “Why the Saraki Political Dynasty Collapsed,” I shared an anecdote that illustrates this attitude.

I wrote: “One of my townsmen who was a professor here in the United States and who returned home to ‘give back to the community’ a few years ago shared with me an experience he had with Saraki that captures Saraki’s imperiousness.

“He said Saraki asked to meet with elders of the Baruten community in Kwara State, which included the area’s four emirs, over a contentious issue regarding political representation. In light of his age, education, and exposure, the professor was prevailed upon to be a part of the delegation. He said the delegation arrived at the venue of the meeting on time, but that Saraki didn’t show up until several hours later.

“When he arrived, he didn’t apologize for his lateness, didn’t establish eye contact with anyone in the delegation, and proceeded to tongue-lash every one of them in the most humiliating manner because he was miffed that they had the impudence to oppose his political choice for the area. Then he stormed out in a huff. The professor said many old men in the group felt so humiliated and so crushed that they literally wept.”

That’s Bukola Saraki. He is a presidential disaster in waiting.

The only thing he is good at is paying people to propagandize for him, to manage the minds of people through artful traditional and social media manipulation to see him as someone he is not. Of course, he’s also good at paying headless troll farms to attack his opponents and critics.

After Buhari, is that the kind of person you want as president?