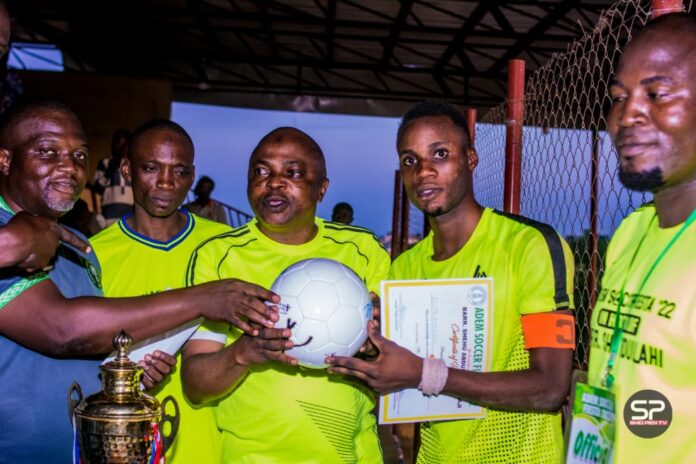 It was early 2020 when the whole world was in the real realm of the Covid-19 outbreak. Businesses were down. Academic was on hold. Large gatherings of people were prohibited. The world was on its knee. It was a time for innovation. A time to think outside the box — or maybe, a time to think as if there was no box at all.

Adewole Elites’Movement, a gathering of elites that came into being in 1992 known for its passion for education and other community development programs couldn’t watch the danger of Covid-19 grow beyond conquer.

We needed to do something different. So came the idea of engaging youths from our community, Adewole, and every other part of the Emirate city of Ilorin. What did we do? For a long period, there were deliberations on how best we can engage the youths of our community and city meaningfully, then we all agreed to have a soccer tournament, which we believed served lots of purposes in our society. You talk of unity the game preaches, you talk about the opportunity for emerging footballers to show the stuff they are made of to the larger populace, what about the prestige and honor it will bring to our dear community? Let alone the honor it will bring to the name of ADEM. All of these were the objectives of the ADEM soccer fiesta. 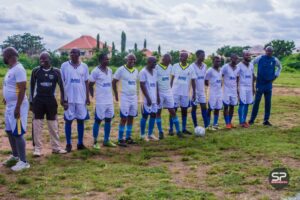 Fortunately, the idea is birthed. The objectives were stated. Then, how do we execute a program we have never had in the history of our community? How do we have a program that will not be counterproductive to our aims and objectives? There were questions we were careful to provide answers to.

In the process, it became glaring that we needed someone with the wherewithal; financial strength, passion for the game, love for the Movement, and obviously— the urge to see our community develop.

No doubt, our community is blessed with people of great stature, panache, charisma, and wherewithal, but how do you find someone who loves the game to chest and finance such an event? We were told not to look further; for we’re blessed with Barr. Ibrahim Atanda, the CEO of Al Raheem group of schools. His acceptance to finance the first edition of ADEM Soccer Fiesta ’20 wasn’t rocket science, for he was a great footballer in his younger days.

For the love of our community, Barr. Atanda chested the finance of the first edition. From the opening day of the tournament, Barr. Atanda will ask the sports committee ably led by Elite Hassan Abdulrafiu Olojoku what else was needed to be done for the smooth running of the event. What a committed community man. 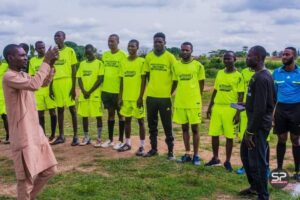 Throughout the event, Barr. Atanda was on the ground to offer all the support within his reach. For whatever we saw during the event, the biggest of them was to come during the Grand finale of ADEM soccer fiesta ’20. This time, Barr. Ibrahim took ADEM to the global stage by taking the final to Kwara State’s main bowl. The atmosphere was electric for people who matter in sports development in Nigeria were on the ground to grace the final. The legendary Mr. Bayo Issah was in attendance to run commentary, the evergreen Fani Amu was the special guest of honor. What a time to be a member of ADEM. Indeed, we should give Barr. Ibrahim Atanda the gold medals. He’s worth it. History will judge our darling Barrister well. The maiden edition of ADEM Soccer Fiesta ’20 saw Debby Football Club as the winner. So it ends. For the first time, ADEM was heard worldwide with the massive support of Barr. Ibrahim Atanda. Give all the gold medals to our munificent Barr. Atanda.

Fast forward to 2022, there was every reason for the executive of ADEM ably led by its president, elite Wahab Lukman Olojoku to sustain the good job of the past administration through sports. Once again, the idea to stage the second edition of ADEM soccer Fiesta ’22 was mooted on the floor of congress. Without so much ado, it was welcomed by the members of congress. The tough task as usual was again on the front burner —again— who do we choose as the Honoree for the second edition of our showpiece?

No doubt, we had the luxury of options for our community was blessed with worthy people. But again, against every odds, we decided to choose another Barrister as the Honoree for the second edition of the ADEM soccer fiesta. A process the Honoree himself —Barr. Shehu Abdullahi Mogaji described it as a “coup”. The type of “coup” he accepted with honor, respect, and love. 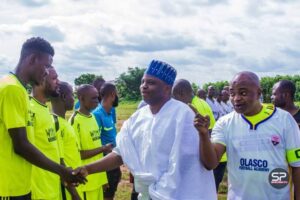 There and then, Barr. Shehu Abdullahi Mogaji accepted to bear the burdens of all Adewolites. And once again, the chairman and other members of the ADEM sports committee had on their necks the rigorous task of surpassing the pace they had set in the maiden edition of the fiesta. From the unveiling process to the kick-off of the fiesta, throughout the group stages, the knockout stages, and the Grand finale, Barr. Shehu Abdullahi Mogaji is ever-present physically, mentally, spiritually, and of course, financially.

Journeying through the fiesta, there was a new development that which add glamors and uniqueness to what we had in the maiden edition. One of them is the venue of the championship. The maiden edition was staged at Mohammed Kamaldeen College, Apalara area, while the second edition took place at Baseball Park, Adewole. A more serene, tranquil, secured, and honorable atmosphere for a such championship. That we secured the pitch for the championship came at a cost, maybe not financially in its entirety. The support of the golden sons and daughters of Adewole in securing the venue cannot be overemphasized. That also explains how Barr. Shehu Abdullahi Mogaji is loved and accepted amongst Adewole people. Very sincerely, we should give the gold medals to Barr. Shehu Abdullahi Mogaji.

Since this piece was put up before the Grand finale of our darling showpiece, this year’s edition of ADEM Soccer Fiesta is in honor of Barr. Shehu Abdullahi Mogaji will either be won by Skillz FC from Unilorin or Elite Athletics from Airport, Ilorin. That also rates ADEM at a very excellent scale in integrity test, for this year’s edition will certainly be won by a team from outside our community. That then doesn’t mean our community is bereft of quality in football, it’s just that we ensure fair play and we won’t ever subscribe to biasness as the integrity of our great movement is sacrosanct. Again, give the gold medals to our very own Barr. Shehu Abdullahi Mogaji and Adewole Elites Movement.

In conclusion, this piece would have been a cheat if I fail to appreciate the sons and daughters of Adewole who unveiled the first edition and the second edition of our tournament. You all are deserving of the gold medals. Without you, there may not be the glamour we enjoyed. I may not be able to mention all of our unveilers but obviously, you’ve got to pardon my obliviousness.

Now, we should pack all the gold medals in the world and deliver them to the doorsteps of our Barristers – Barr. Ibrahim Atanda and Barr. Shehu Abdullahi Mogaji.

Yusuf Mutiu Olaitan is the immediate former Publicity Secretary of ADEM. He can be reached via; 07061350320
[email protected]