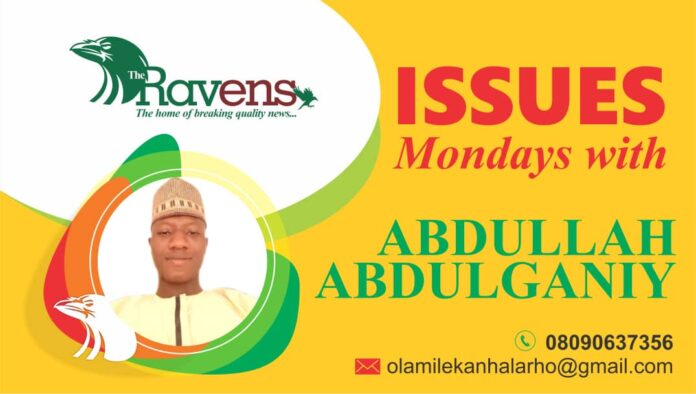 It’s been a while with my readers on this space. Apologies for such a break in transmission. As many of my religious followers must have learnt, I now have a big commitment at hand which may at intervals disrupt my column writing. I therefore plead that you all indulge me.

Yes, events of the past few weeks in the country have not only been fascinating, they have also sparked [and indeed continue to spark] mixed reactions from various quarters. Here in Kwara State, two major events largely dominated the headlines for most part of last week. And being a column page that’s always on the lookout for such burning issues, you should trust ISSUES not to turn a blind eye to them.

On the one hand is the issue of the ‘sunset teachers’. They were so named because they were engaged at the tail end of the previous administration of Governor AbdelFatah Ahmad.

About 2,414 of them, many pundits believe they constitute a big trap set by the previous administration for the then incoming administration of Governor AbdulRahman AbdulRazaq. Or how do you explain a situation whereby an administration that couldn’t afford to pay workers fully and conveniently is recruiting more workers? That’s biting more than it can chew.

However, like I adverted to, many pundits asserted that Ahmad and his co-travellers were clear on their intent. Purely mischievous, they were in to create a problem for the incoming administration. What they wanted to achieve by that well-perfected shenanigan was to pit the people against the new government and make it run into legitimacy/popularity crisis since they believed the usual politics card would be played. To their chagrin however, Governor AbdulRazaq broke their hearts.

Many persons rightly called for the sack of these sunset workers, but Governor AbdulRazaq reacted like a true father of the state. Summary of his position: These sunset workers are our sons, daughters, brothers and sisters. They were only unfortunate to have been used to play a bad, dangerous politics. We’ll indulge them but nonetheless carry out a screening on them to test their qualification and certification to teach our children. Clear and straight forward, if you ask me.

Mind you, Dr Ahmad who directed that these sunset teachers be recruited only gave approval for 1,100 slots on the condition that they would take English, Mathematics and relevant Science subjects. But this condition was violated flagrantly and mindlessly. Times two the approved quota was recruited. This ordinarily is a valid loophole Governor AbdulRazaq could ride on to invalidate the whole process. Even so, he was considerate. But the only point he said he wouldn’t trade for anything is the qualification and certification of these teachers.

And that’s where he would run into trouble because many of these so called sunset teachers are not qualified. They do not fit for the classroom. A screening conducted showed that about 756 of the 2,414 are not qualified. The remaining 1,658 were cleared and the government had shown interest to carry on with them.

Trouble however started when the government detected that around 594 persons were mixed with the cleared 1,658 ones. Their names were inserted into the payroll. The Yorubas would say, “iru ti dapo mo sapa” and that, “won ti ko eran mo ero”. Revelations later emerged that part of the 1,658 persons adjudged to be qualified are not in the real sense, as many of them do not possess genuine required certificates.

What’s however unfortunate is that the unscrupulous elements who tinkered with the process have made those who may be qualified among the sunset teachers victims of circumstance. The similitude like I once pointed out in a group chat is when garri mixes with sand; the garri becomes ill-fated no matter how pure and rich. It could also be likened to a scenario where you are bitten by a mosquito. You don’t go to single out the offending mosquito if you crave total solution. What you do is crush all nearby mosquitos.

In other news, the government has therefore resolved to start a new process to remedy the situation. I do not see any reason why a sane mind should start vilifying this well-thought decision. For me, it’s the reasonable step to take in such a circumstance. The genuine intention of the Governor could be sighted in the fact that all the sacked sunset teachers who are sure of themselves are given the window to participate in the new recruitment whose quota has been in fact enlarged. Elsewhere, these people would have been treated as persona-non-grata. All their outstanding payments were in fact cleared. Great one!

Again, those who read politics or vendetta as the case may be to the issue missed it. In my frank view, if the Governor were more interested in politics, he would have sacked the sunset teachers since day one like some other governors did in their various states. There was already a logical and legal basis to do so. It’s therefore myopic to read politics to the issue given how wise the governor had reacted.

Similarly, those who, just in a bid to court public attention by second-guessing every government position, said the Governor should have trained the sunset teachers instead of taking the bold step of relieving them are only being clever by half, with due respect. How do you go to build something on nothing?

Public resources are better channelled into what will yield value and public good. As the good Samaritans that they are, these people can go on to employ the sunset teachers, many of whom have been adjudged unfit for classroom into their own privately established schools; and then take their money and time to start training them. Of course, training of employees is welcome, but then you only train those who have basic qualifications not the untrainable. That would only amount to pouring water in the basket. A futile exercise!

I think I should be succinct on Ile Arugbo, even when I have so many thoughts to pour down on it. Many readers may get bored if the musing gets unnecessarily windy. Key takeaway: This is exactly one year after the notorious Ile Arugbo was pulled down since it was alleged to have been illegally possessed by the occupants (the Sarakis).

One would have expected that with the ranting and raving of Dr Bukola Saraki, his sister, Senator Gbemisola Saraki and their bunch of political ‘halleluyas’ last year, a Certificate of Occupancy, simply put, C of O would have been produced. But all seemed to be empty braggadocio. No single document to show the property was properly acquired.

Their unnecessary dilly-dally at the court of law which earned them being fined by the Judge over Ile Arugbo goes to prove that they have no genuine case to pursue. They just want to ride on emotions, blackmail the government to package illegality as legality. No amount of crocodile tears, rambling and sponsored articles would change the fact that Ile Arugbo was a crime against humanity. What’s supposed to be a collective patrimony was converted into private use with reckless audacity and sense of entitlement. This was the culture in the previous order as exposed by Justice Orilonise’s panel.

Genuine Kwarans are only waiting for the Sarakis to provide their C of O at the law court. Anything short of that is theatrics. Lest I forget, I should add that on the sunset teachers, the government should do a thorough investigation to unravel those culpable in the peculiar mess of inserting unqualified persons into the payroll, thereby distorting the whole screening exercise. They should be dealt with irrespective of how highly placed they are.

And since the government had assured that the new process would be largely tech-driven, I think it should erase our fears of manipulation. Though there is no wholly perfect process, this should pass basic test on integrity and objectivity. I rest!