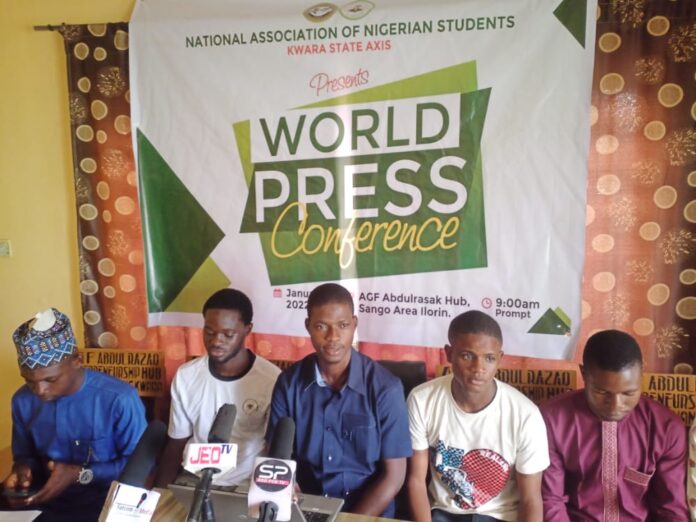 National Association of Nigeria Students Kwara State Axis has earlier today urged the Kwara State Government led by Governor AbdulRahman AbdulRazaq to appoint a capable hand to the position of SA Students’ Affairs to see to the welfare of students populace in the state.

This much was contained in a statement delivered by the Chairman of NANS Kwara Axis during a press conference held at NANS Entrepreneurship Hub, Sango, Ilorin.

During the conference, the Chairman, Comrade Saleeman Yusuf Issah, made it known that the students constituency are not well represented, and it’s due to the fact that there is no office created to look into students yearnings or bring succour to the students.

Read the full press release below:

1. Good morning, gentlemen of the press. We feel especially privileged to have you here this morning, considering that this is a festive and holiday season when everyone is taking a much-deserved rest. We thank you most sincerely for your sacrifice, and we appreciate you all.

2. We say a very prosperous new year to all Nigerian students domiciled in Kwara. 2021 was with its up and down, but then, it was a year filled with happiness and breakthrough for NANS Kwara.

3. Going into the new year, it’s very obvious that Nigerians are struggling to cope with the economic situation of our country and cost of living has been on the high side in the land. It didn’t start today, and it didn’t start on its own. The Government have their own share of it while the citizens aren’t left out. We can only hope it gets better.

4. It’s now even disheartening and shocking that despite all the hardships common Nigerians are going through, the Federal Government have decided to further compound our sufferings by removing subsidy. A step like this at this critical time of economic instability is dangerous and malicious. We urge the Federal Government to find a way around it and ditch the idea of subsidy removal.

5. Gentlemen of the press, Insecurity in Nigeria is ubiquitous. No part of the land is safe. We call on Government at various level to stand up to this challenge. There won’t be a Government if there aren’t people. Nigerians are dying in numbers every day. We need to be protected.

6. On various campuses in Kwara, it’s saddening that school management are trying all within their capacity to incapacitate Students Union. This, we see as illogical and illegitimacy. Any school that is organizing its Students Union election in first semester is not only silencing the Union but killing it. It’s ridiculous how school management will speak against injustice to the higher authority but detest seeing students speaks against any form of impunity, injustice and disrespect on their own part.

6. Schools management can only restore their commitment to equity and fairness only if they can shift Union election to second semester. This will give Students the opportunity to elect their most trusted colleagues into various offices. It will give the elected Students officials the atmosphere to function effectively well.

7. Hence, we implore every schools in Kwara who holds their Students Union election in first semester to kindly rethink and do the needful, if at all they aren’t on a mission to silence students.

8. Consequently, in the current Government in Kwara, the Students constituency aren’t well represented. And this is totally due to the fact that there isn’t an office created to look into students yearnings or bring succour to the students. Since the coming of the administration of Mallam Abdulrahman Abdulrazaq, it is on record that he hasn’t for once appointed a special adviser on Students affairs. This, in many ways has hurt the yearnings of students.

9. Obviously, there are ministries of Education and that of Tertiary Education, but as far as we are concern, such ministries deals directly with the school management. They are created to work with school authorities, not us. There is a limit to what we can do together. Yes, we appreciate the tremendous works of both ministries, but we Nigerian Students in Kwara wants more.

10. Dearest Nigerian students, we want to seize this august moment of New year to call on the Government of Kwara State to kindly give voice to the students community in the state by appointing a special adviser on Students matter. This is the only way we’ll feel represented. After all, the population of Youths in electioneering process is intimidating and overwhelming that no one would look beyond.

11. As a matter of fact, Kwara State Governor, Mallam Abdulrahman Abdulrazaq should appoint a special adviser on Students matter as soon as possible. We were hopeful that it wouldn’t take this long but we have been so left in confusion as to when we’ll be represented. Look around, there are people of immense quality who are true participants in birthing this administration that can serve as special adviser on Students matter to the governor and deliver effortlessly and relentlessly well.

12. Ultimately, once more, we call on Kwara State Government under the wings of Mallam Abdulrahman Abdulrazaq to return the payment of subvention to our Tertiary institutions in the state. Notable amongst the institutions needs to be subvented are; Kwara State University, Malete, Kwara State Polytechnic, Ilorin, and College of Health Technology, Offa.

13. Greatest Nigerian Students! The three schools mentioned above have over the years been churning out beautiful brains. They have given us lots of adorable intellectuals. Thanks to the quality of Education they offered and still offers. But very recently, these schools are fast becoming a no-go areas for children of have-nots. Tuition fees, hostel fees, and other fees are what scaring citizens off those schools. The price of those schools are on the very high side which makes it automatically difficult for the less privileged ones to afford.

15. Hence, the call for them to subvent those institutions. It’s obvious that those schools have been left to themselves for quite sometimes and that’s the major reason they have not been affordable. We genuinely and sincerely call on Kwara State Government to stand up and rescue the less privileged citizens of this state by doing all within its reach to subvent those schools. As that we revalidate their commitment to liberate Kwara and Kwarans.

16. Greatest Nigerian students! We wish each and everyone of us a prosperous new year. And we pray that the new year shall be a year of UltraReformation for us. Happy Holidays to every Nigerian out there!

Thanks for staying with us!